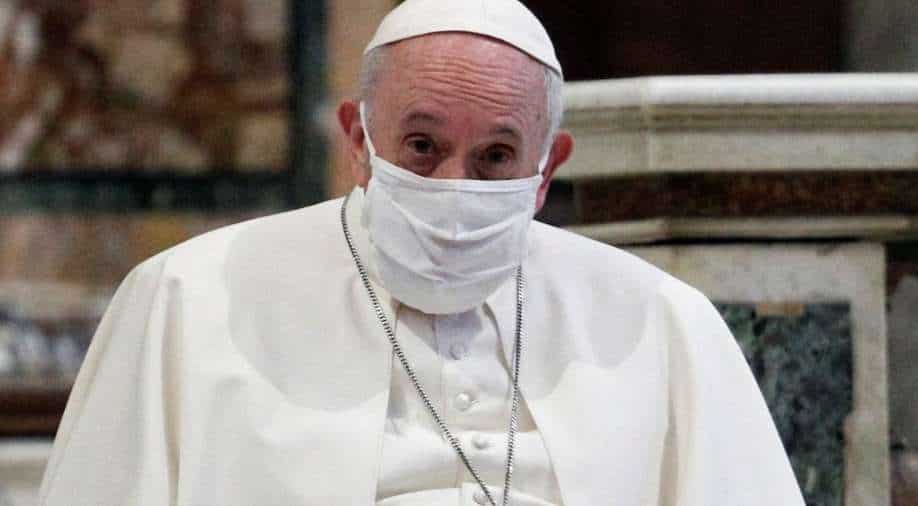 Pope Francis wearing a face mask attends an inter-religious prayer service for peace along with other religious representatives in the Basilica of Santa Maria in Aracoeli, a church on top of Rome's Capitoline Hill, in Rome, Italy Photograph:( AFP )

A day after the Pope addressed a Christmas gathering, two cardinals close to Pope Francis have tested positive for the novel coronavirus, sources from the Vatican revealed on Tuesday.

One of the cardinals who tested positive is one of the most beloved cardinals who is also known as the "Robin Hood". The 57-year-old Konrad Krajewski is in charge of the charities managed by the Pope. Krajewski was showing symptoms of pneumonia and was put under surveillance in a hospital in Rome.

Also read| 'You will always have your jobs': Pope Francis assure Vatican employees

Another cardinal is 78-year-old Italian cardinal Giuseppe Bertello. He is president of the governorate of the tiny state of Vatican City. Bertello tested positive for the deadly virus around the same time.

The Pope has often been criticised for refusing to wear masks in public and during, however, his habits have now changed drastically, especially with the second wave taking over the world.

Meanwhile, the Pope has promised the Vatican employees that the state will retain their jobs and will keep paying their salaries on time, regardless of the economic condition of the state.

"You are the ones who count the most," he said while extending Christmas wishes to the employees and their families. "No one should lose their jobs (or) suffer the brutal economic consequences of this pandemic."