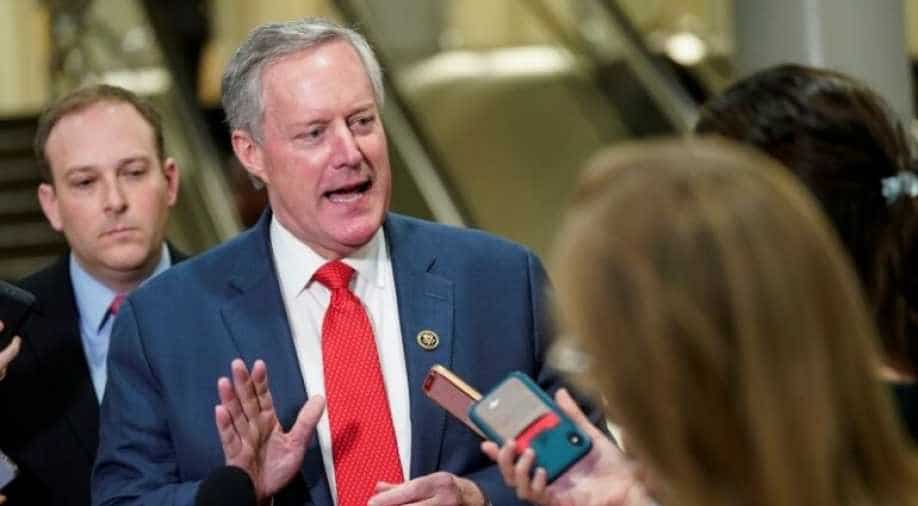 Representative Meadows takes over as the fourth chief of staff in Trump's three years in office.

President Donald Trump parted ways on Friday with acting White House chief of staff Mick Mulvaney and replaced him with conservative lawmaker and close ally Mark Meadows, who was a strong Trump defender during the Democratic impeachment drive.

Representative Meadows takes over as the White House struggles to advance a consistent message about the coronavirus crisis and as Trump goes into a bruising re-election contest.

He becomes the fourth chief of staff in Trump's three years in office, tasked with attempting to bring order to a chaotic presidency.

Meadows is a member of the US House of Representatives from North Carolina and was a combative defender of the president during the impeachment saga, so much so that Trump singled him out for praise at a Feb. 6 event after the Republican-led Senate acquitted the president.

"He's a tremendously talented man, not just as a politician. As a human being, he's incredible," Trump said at the time.

Trump named Mulvaney to be his special US envoy to Northern Ireland, just as he prepares to welcome Irish Prime Minister Leo Varadkar to Washington for St. Patrick's Day ceremonies later this month.

A former senior administration official said the change had been a long time in the works and was a "done deal" some time ago.

Trump announced the Friday night move just after arriving at his Mar-a-Lago Club in Palm Beach, Florida, where he is spending the weekend.

"I am pleased to announce that Congressman Mark Meadows will become White House Chief of Staff. I have long known and worked with Mark, and the relationship is a very good one," Trump said on Twitter.

"I want to thank Acting Chief Mick Mulvaney for having served the Administration so well. He will become the United States Special Envoy for Northern Ireland. Thank you!" said Trump.

Trump had long groused about Mulvaney, who angered the president last autumn by saying at a White House news conference that Trump had sought to persuade Ukraine to investigate Democratic rival Joe Biden by withholding US aid to Ukraine.

What Mulvaney said ran counter to the argument Trump was advancing - that there was no "quid pro quo" with Ukraine. Mulvaney quickly walked back the statement, but the damage was done.

Mulvaney, a conservative former South Carolina lawmaker, did last more than a year as acting chief of staff after replacing retired General John Kelly, who had succeeded Reince Priebus in the job.

A source familiar with Mulvaney's thinking said he had been discussing the issue with Trump for months and told the president he wanted to do more in Belfast after making a trip there last month. The position provides Mulvaney an official connection to the administration after his exit, something previous holders of the job under Trump have not gotten.

Still, another source familiar with the situation said both Mulvaney and Meadows flew aboard Air Force One with Trump to North Carolina on Monday and there was little warmth between the two men. Trump did not speak to Mulvaney, the source said.

Meadows announced in December he would not run for re-election this year in his North Carolina district.

"This was the most orchestrated personnel change so far. Since the Northern Ireland deal was announced at the same time, this was clearly a mutual decision," said Sean Spicer, Trump's former White House press secretary.

Spicer said Meadows had a clear understanding of Trump's style and agenda.

Mulvaney was named acting chief of staff in December 2018 and Trump never made the appointment permanent.