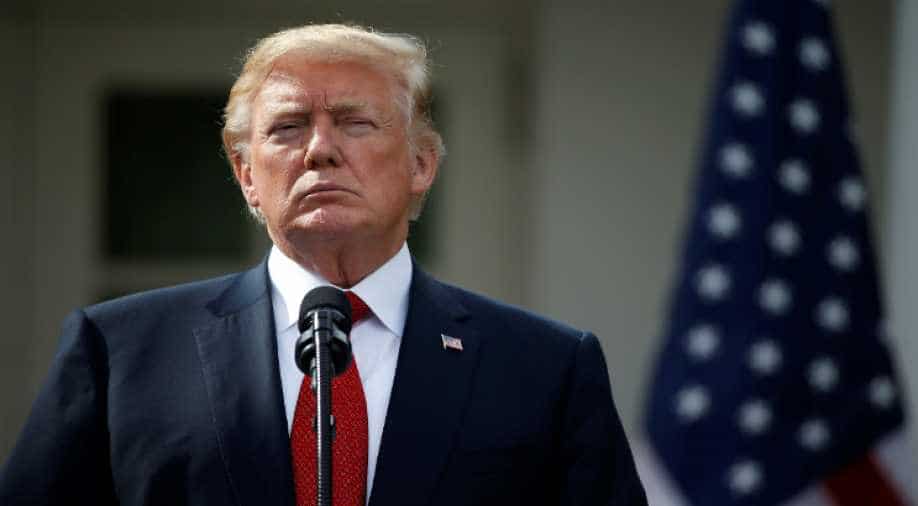 Uzbek immigrant Sayfullo Saipov is accused of killing eight people by driving a truck down a popular Manhattan bike path in the deadliest act of suspected terrorism to strike New York City since Sept. 11, 2001. Photograph:( Reuters )

US President Donald Trump on Thursday reiterated his call for the death penalty against the Uzbek immigrant accused of killing eight people by driving a truck down a popular Manhattan bike path in the deadliest act of suspected terrorism to strike New York City since Sept. 11, 2001.

Sayfullo Saipov, 29, was charged in federal court on Wednesday with acting in support of the militant group Islamic State by plowing the truck down a riverside bike trail, injuring a dozen people in addition to those killed.

Trump had suggested on Wednesday sending Saipov to the Guantanamo Bay military prison in Cuba, where terrorism suspects apprehended overseas are incarcerated, but on Thursday he said doing so would be too complicated.

"Would love to send the NYC terrorist to Guantanamo but statistically that process takes much longer than going through the Federal system," Trump said on Twitter.

He added: "There is also something appropriate about keeping him in the home of the horrible crime he committed. Should move fast. DEATH PENALTY!"

According to the complaint filed against him, Saipov told investigators that he had been inspired by watching Islamic State propaganda videos on his cellphone, felt good about what he had done and asked for permission to display the Islamic State flag in his room at Bellevue Hospital Center.

Saipov was taken to Bellevue after he was shot in the abdomen by a police officer at the time of his arrest.

Trump on Thursday also repeated his the call for Congress to end the Diversity Immigrant Visa program under which Saipov entered the United States in 2010, saying on Twitter: "We need to make AMERICA SAFE!"

The diversity program, signed into law in 1990 by Republican President George H.W. Bush, was designed to provide more permanent resident visas to people from countries with low U.S. immigration rates.

One of the two criminal counts Saipov faces, violence and destruction of motor vehicles causing the deaths of eight people, carries the death penalty if the government chooses to seek it, according to acting U.S. Attorney Joon Kim.

Tweets and the death penalty

Trump's tweets calling for the death penalty before Saipov even had a chance to enter a plea to the charges he faces could work to the defendant's advantage by giving his lawyers a chance to argue that the president prejudiced potential jurors.

"The defence is sure to raise this as unfair and raising questions about a jury being able to reach an impartial verdict," said James Acker, a criminal justice professor at the State University of New York in Albany who specializes in capital punishment.

It could be used to make an argument that a judge should not allow the death penalty as a sentencing option, Acker said, adding that "the likelihood of that succeeding is very small."

Saipov's defence attorney did not immediately respond to a request for comment.

Asked by reporters whether he thought Saipov should be executed if convicted, New York City Mayor Bill de Blasio said he categorically opposes the death penalty.

"I believe this is an individual who should rot in prison for the rest of his life," he told a news conference.

Dzhokhar Tsarnaev, the surviving member of a pair of ethnic Chechen brothers who killed three people and injured more than 260 when they bombed the 2013 Boston Marathon in an attack inspired by the al Qaeda militant group, was sentenced to death in 2015. He is the only inmate among the 61 people on federal death row convicted for an act charged as terrorism.

Senator Lindsay Graham, a Republican, on Thursday repeated his criticism of the Justice Department for charging Saipov in the courts rather than treating him as an enemy combatant.

"I'm dumbfounded as to why the Trump Administration still follows the Obama playbook when it comes to dealing with terror suspects," Graham said in a statement.

Kim, the federal prosecutor, said the filing of charges against Saipov in federal court does not preclude the government from later declaring him an enemy combatant, though legal experts said such a move was highly unlikely.

Experts also said it would be highly improbable to send Saipov to Guantanamo because a federal judge would have to agree to turn him over to a military commission, and no person has ever been sent to Guantanamo straight from U.S. soil. In addition, as a permanent legal resident of the United States Saipov has virtually the same rights as a U.S. citizen, they said.

Declaring an individual an enemy combatant allows investigators to interrogate the person without having a lawyer present.

Saipov did waive his right to remain silent or have an attorney present when he agreed to speak to investigators from his bed at Bellevue Hospital in Manhattan, according to the criminal complaint.

The Federal Bureau of Investigation said it had located another Uzbek man, Mukhammadzoir Kadirov, 32, wanted for questioning as a person of interest in the attack.

Five Argentine tourists, a Belgian woman, a New Yorker and a New Jersey man were killed in Tuesday's attack.

The attack unfolded a few blocks from the site of the World Trade Center where some 2,600 people lost their lives after suicide hijackers crashed two jetliners into the Twin Towers 16 years ago.