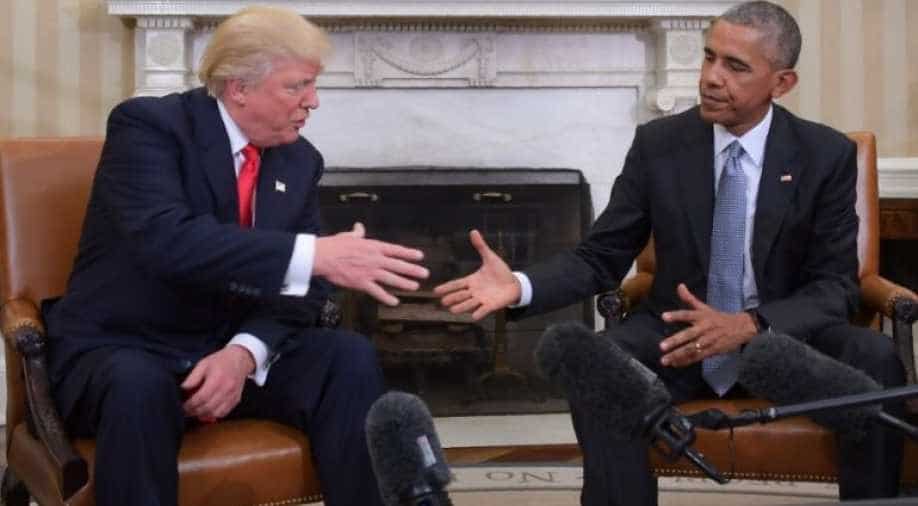 File Photo: US President Barack Obama and Republican President-elect Donald Trump shake hands during a transition planning meeting in the Oval Office at the White House on November 10, 2016 in Washington,DC. Photograph:( AFP )

The poll said the US president Trump is more popular now than two years ago with improved job approval rating.

US President Trump and ex-president Obama have ended in a tie to become the "most admired man" in America, according to the latest Gallup poll.

President Donald Trump also ended with Obama in a dead heat with eighteen per cent Americans polling in his favour. Gallup said that Americans were divided heavily along party lines when they picked their candidate with forty-one per cent Democrats naming Obama and forty-five per cent Republicans going with Trump.

The poll said the US president is more popular now than two years ago with improved job approval rating. Obama, the poll said made it to the top slot for the twelveth time as against first time for Trump.

The poll found former first lady Michelle Obama as the most admired woman for the second consecutive year.

Interestingly, at least eleven per cent Americans named a relative or a friend as the most admired with eighteen per cent naming other people. The poll revealed that twenty-five per cent did not name anyone.

Significantly, Trump's numbers increased from 2017 when only fourteen per cent Americans picked him and just thirteen per cent last year.