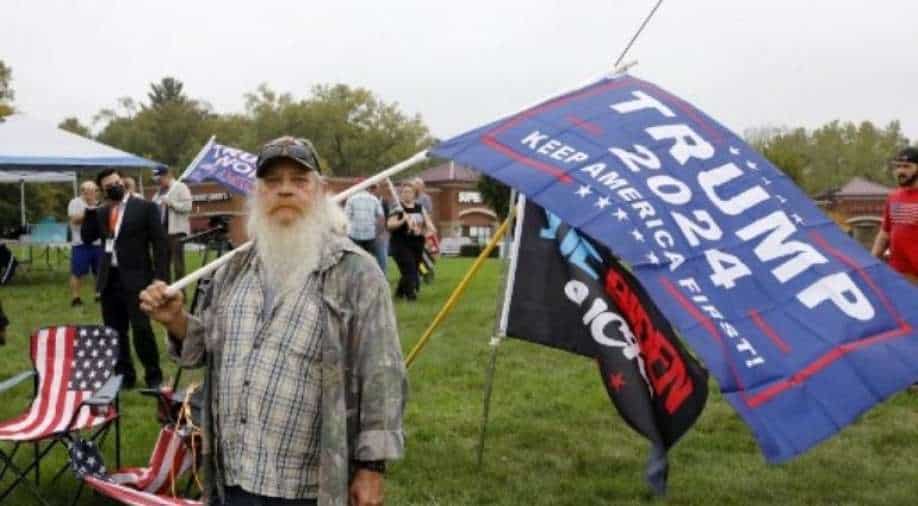 A Pew Research Center poll released Wednesday found that two-thirds of Republicans say Trump should continue to be a major national figure, an increase of 10 percentage points from January

With all the subtlety of a bullhorn, former President Donald Trump has been hinting that he plans to run for office again in 2024.

And Republicans are so far treating him with the deference they displayed while he was in the White House as they wait to see if he makes his move.

On Saturday afternoon, Trump heads to Iowa for a rally at the state fairgrounds, a perennial stop on the presidential campaign circuit. Joining him will be several of the state’s top Republicans, including Gov. Kim Reynolds, Sen. Charles E. Grassley and the chairman of the Iowa Republican Party, Jeff Kaufmann — a testament to the former president’s enduring dominance.

Trump’s unwillingness to cede the spotlight has cast doubt on the political futures of an entire group of Republican politicians who have suggested that they might someday want to run for president. And while they — like the rest of the country — can’t be sure what the notoriously fickle former president might do, some of them are trying to stake their claims as leaders in the party.

That requires a good deal of delicacy on their part. And it got a little awkward this week for two of them.

First there was former Vice President Mike Pence, whose refusal to interfere with the counting of the electoral votes on Jan. 6 deeply angered Trump and helped precipitate the deadly assault on the Capitol that day. Pence gave an interview this week to Sean Hannity of Fox News and sounded at times an awful lot like someone who wants to be president.

He attacked President Joe Biden for withdrawing US forces from Afghanistan. He also criticized the president’s approach to domestic affairs — for “lecturing the American people about vaccine mandates” and promoting what Pence called a “massive, big-government, socialist bill” before Congress that would widen the social safety net and address problems like climate change.

But when Hannity broached the subject of Pence’s reportedly frayed relationship with Trump, the former vice president tried to deflect by accusing the news media of blowing the events of Jan. 6 out of proportion, referring to it obliquely at one point as “one day in January.”

“They want to use that one day to try and demean the character and intentions of 74 million Americans who believe we could be strong again and prosperous again and supported our administration,” Pence said.

He did not address the fact that numerous rioters at the Capitol called for his execution during the attack, demanding that he be hanged for not carrying out Trump’s wishes. And Hannity didn’t bring it up.

Then there was a speech by Nikki Haley, another former Trump administration official whose relationship with Trump was damaged because she had declared herself “disgusted” with him after Jan. 6 and predicted that he’d “lost any sort of political viability.”

But Haley, who served as governor of South Carolina and ambassador to the United Nations, praised Trump in an appearance at the Ronald Reagan Presidential Library in Simi Valley, California. She criticized Trump’s political opponents for accusing him of being compromised by the Russians, and said that Biden’s posture toward Russia was weaker by comparison.

Separately, in an interview with The Wall Street Journal this week, she lauded Trump’s ability to “get strong people elected” and insisted, “I don’t want us to go back to the days before Trump.”

At the moment, that doesn’t seem like an option for Haley or anyone else who wants to have a bright future in the Republican Party. Trump continues to attack Republicans who broke with him after Jan. 6 and supported his impeachment, such as Rep. Liz Cheney of Wyoming.

His first rally since the day of the Capitol riot was in June outside Cleveland. He endorsed a local Republican who was challenging Rep. Anthony Gonzalez in next year’s primary election. Gonzalez, one of the 10 House Republicans who voted to impeach Trump for his role in inciting the riot, announced last month that he was leaving Congress rather than staying to face his Trump-approved challenger.

Polls taken over the course of the year have shown that Trump remains the overwhelming favorite for Republican voters, suggesting that he would be difficult to beat in a primary if he did indeed run. Though his popularity suffered somewhat in the immediate aftermath of Jan. 6, most Republicans seem to have moved on. A Pew Research Center poll released Wednesday found that two-thirds of Republicans say Trump should continue to be a major national figure, an increase of 10 percentage points from January. Forty-four percent of Republicans or Republican-leaning voters want him to run again.

The Pew poll also found little tolerance for dissent. Asked whether their party should accept politicians who openly criticize Trump, 63 per cent said no.