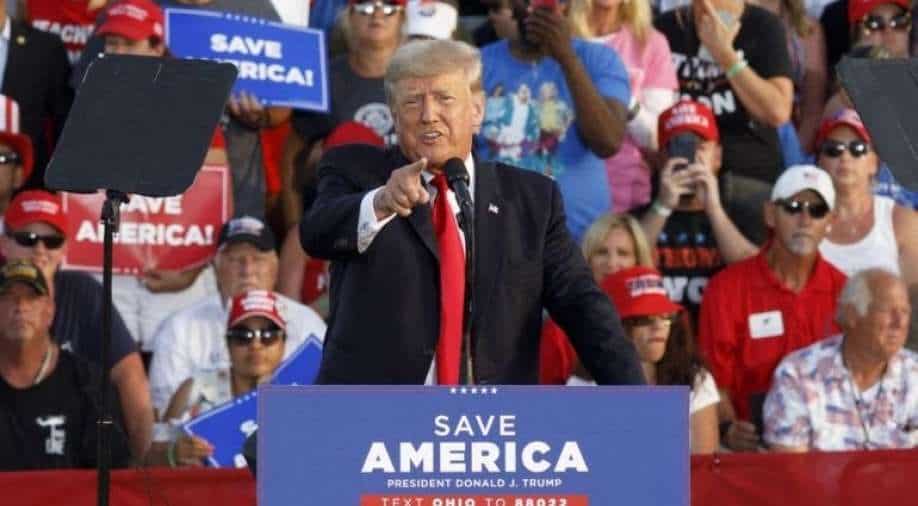 In this file photo, former US President Donald Trump can be seen gesturing during his campaign-style rally in Wellington, Ohio Photograph:(AFP)
Follow Us

Trump's event on Saturday night at Ohio's Lorain County Fairgrounds, not far from Cleveland, was held to support Max Miller, a former White House aide, who is challenging Republican Rep Anthony Gonzalez for his congressional seat

Former US president Donald Trump on Saturday reprised his baseless election grievances and painted a dystopian picture of the country under Democratic control in his first campaign-style rally since leaving the White House.
His mission, in part, was to exact revenge on one of the Republicans, who voted for his historic second impeachment.

Trump's event on Saturday night at Ohio's Lorain County Fairgrounds, not far from Cleveland, was held to support Max Miller, a former White House aide, who is challenging Republican Rep Anthony Gonzalez for his congressional seat. Gonzalez was one of 10 GOP House members, who voted to impeach Trump for his role in inciting the deadly January 6 insurrection at the Capitol building. Trump wants them to pay.

In his remarks, Trump revisited some of the false claims familiar from his fruitless challenges of President Joe Biden's election victory. "On the evening of November 3, the election was over and then all of a sudden things started closing down all over," he said of election night. "We took a massive victory, they did, into something that should never be allowed."

In fact, Trump was describing a legitimate vote counting process that saw Biden take the lead as the night wore on, as Democratic-leaning cities in key states and results from mail-in ballots were reported. Trump administration election officials and top election officials in Republican-led states affirmed the validity of the election outcome. In another echo of the past, the crowd chanted 'Lock her up' at the mention of Hillary Clinton, the Democrat he defeated in 2016.

Traffic was backed up from the fairgrounds into town, where pro-Trump signs dotted residents' lawns. On street corners, vendors sold 'Trump 2024' flags and other merchandise as supporters arrived.

The rally, held five months after Trump left office under a cloud of violence, marks the beginning of a new, more public phase of his post-presidency. After spending much of his time behind closed doors building a political operation and fuming about the last election, Trump is planning a flurry of public appearances in the coming weeks. He'll hold another rally in Florida over the July Fourth weekend unattached to a midterm candidate and will travel to the southern border in the coming week to protest President Joe Biden's immigration policies.