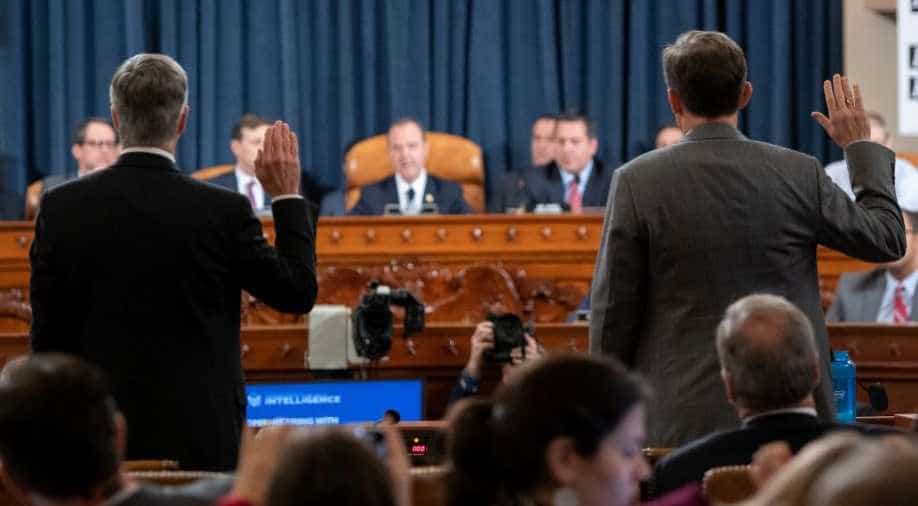 William Taylor, the acting US ambassador to Ukraine, told the House Intelligence Committee, which is conducting the hearings, that he was told Trump cared more about the probe into his likely 2020 rival than he did about Ukraine.

William Taylor, the acting US ambassador to Ukraine, told the House Intelligence Committee, which is conducting the hearings, that he was told Trump cared more about the probe into his likely 2020 rival than he did about Ukraine.

Trump is accused by Democrats in the House of Representatives of abusing his power by using US military aid to pressure Kiev into opening an investigation into Biden and his son Hunter, who served on the board of a Ukrainian gas company.

Trump, who maintains he did nothing wrong, dismissed the impeachment inquiry as a "witch hunt" and said he was too busy to watch the first televised hearings.

Taylor, who testified in a closed hearing last month, said he had since become aware of a telephone call between Trump and Gordon Sondland, the US ambassador to the EU, that was overheard by a member of Taylor's staff.

In his opening statement, Taylor recalled his opposition to making US military aid to Ukraine contingent on Ukraine opening an investigation of the Bidens.

"Withholding security assistance in exchange for help with a domestic political campaign in the United States would be crazy," he said. "I believed that then and I believe it now."

Democrats who control the House plan to prove over several weeks of hearings that Trump abused his office by asking Ukraine to investigate the Bidens.

The investigation threatens to make Trump only the third US president to be impeached, after Andrew Johnson in 1868 and Bill Clinton in 1998, although to be removed from office he would need to be convicted by the Republican-led Senate.

Neither Johnson or Clinton was convicted and removed. But in 1974 Richard Nixon resigned in the face of certain impeachment and removal from office for the Watergate scandal.

Opening the inquiry Wednesday morning, House Intelligence Committee chairman Adam Schiff, the California congressman overseeing the probe, said "there are few actions as consequential as the impeachment of a president."

"The questions presented by this impeachment inquiry are whether President Trump sought to exploit (Ukraine's) vulnerability and invite Ukraine's interference in our elections," Schiff said. "If this is not impeachable conduct, what is?"

Devin Nunes, the top Republican on the Intelligence Committee, hit back by accusing Democrats of waging a "scorched-earth war against President Trump" and a "carefully orchestrated media smear campaign."

Taylor and George Kent, deputy assistant secretary of state for European and Eurasian Affairs, have already testified in private that Trump used US military aid to pressure Ukrainian President Volodymyr Zelensky to open an investigation into the Bidens.

"I do not believe the United States should ask other countries to engage in selective politically associated investigations or prosecutions against opponents of those in power because such selective actions undermine the rule of law regardless of the country," Kent said in his opening statement Wednesday.

Speaking minutes before the hearing, Nancy Pelosi, the Democratic speaker of the House, said the probe was necessary to show Trump he can't do "whatever he wants."

"That he is not above the law," Pelosi said. "And that he will be held accountable."

Coming just one year before national elections, the hearings carry great risks for both parties and no certain reward, with a divided US electorate weary of Washington infighting.

But they also show that Trump's sizable voter base, which delivered his shock victory in 2016, rejects the allegations.

Republicans have sought, in closed door depositions over the last six weeks, to refocus attention on Biden's link, through his son, to Ukraine, and on the widely discredited theory Trump apparently believes that Ukraine assisted Democrats in the 2016 election.

Democrats have amassed evidence that Trump sought to leverage Zelensky's desire for a meeting between the two leaders and for some $391 million in aid to get Ukraine to find dirt on Biden, who could face Trump in next year's presidential election.

The key evidence is the official White House transcript of a July 25 phone call showing Trump pressuring Zelensky to open investigations into Biden and the 2016 conspiracy theory.