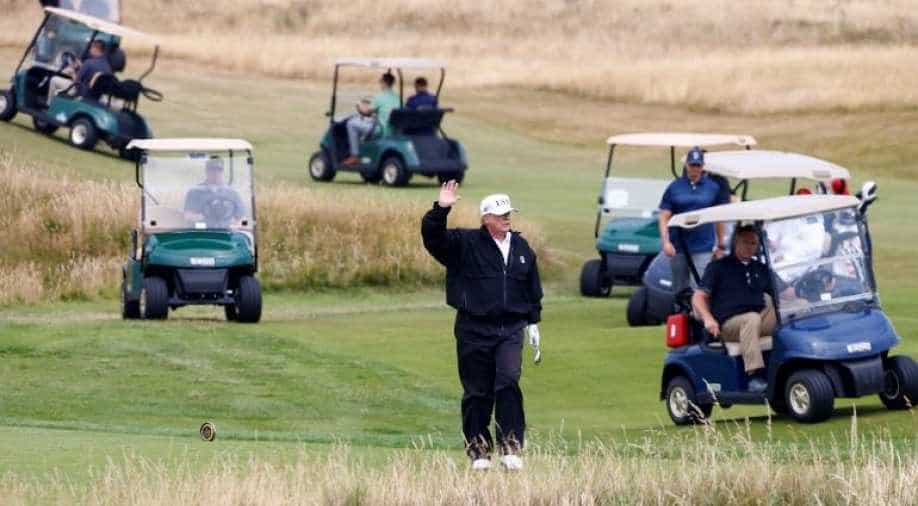 It was Donald Trump's second golf trip during the pandemic and as per some reports his 266th golf trip as the president of the United States.

The coronavirus has engulfed the world and Donald Trump has once again broken the record of how many times he has played golf as the US president.

The US president had made a promise to the American people that he won't play the sport at all after he gets to the White House. A promise that he has failed to keep - even during a pandemic.

Trump just loves golfing, so on a sunny Saturday morning he headed towards his own golf club in Sterling, Virginia. TV cameras accompanied the presidential motorcade on its way to the Trump national golf club, after all it was going to be his first time at a golf course in three months.

A few moments later the US president emerged wearing a white cap and a white polo shirt accompanying him on the golf course were some White House officials all of them had to take a break after saving so many lives.

So they decided to relax a little and not wear masks. A couple of hours at the golf course and Trump realised that the cameras were still there. So he decided to wave at them and head back to the White House. He departed the venue a few minutes later as his motorcade drove down the road a few demonstrators gathered with placards, perhaps a sign of love.

Only this time Donald Trump didn't think of it that way as soon as he reached the White House, he unleashed a barrage of tweets. Tweets about the fake and totally corrupt news which made his outing sound like a mortal sin.

Tweets about why the same media does not talk about all of the time Obama spent on the golf course and tweets about how he has shattered 100 per cent of the ISIS Caliphate.

Some stories about the fact that in order to get outside and perhaps, even a little exercise, I played golf over the weekend. The Fake & Totally Corrupt News makes it sound like a mortal sin - I knew this would happen! What they don’t say is that it was my first golf in almost...

Trump says he deserves credit for doing so because he was "left a mess" even as the United States still leads the world with more 1.6 million cases of this virus. The coronavirus death toll is closing in on the 100,000 mark, it currently stands at 98,223.

....3 months and, if I waited 3 years, they would do their usual “hit” pieces anyway. They are sick with hatred and dishonesty. They are truly deranged! They don’t mention Sleepy Joe’s poor work ethic, or all of the time Obama spent on the golf course, often flying to....

....Hawaii in a big, fully loaded 747, to play. What did that do to the so-called Carbon Footprint? He also played moments after the brutal killing by ISIS of a wonderful young man. Totally inappropriate - and it was me who shattered 100% of the ISIS Caliphate. I was left a MESS!

Is it then a good time to play golf? The United States was commemorating Memorial Day, its most somber national holiday. A day meant to pay tributes to martyred American soldiers not to head out for a golf trip. Certainly not if you're the president. It was his second golf trip during the pandemic and as per some reports his 266th golf trip as the president of the United States.

According to some reports, the White House has apparently spent $130 million on these outings if reports are to be believed. Donald Trump's golf trips have cost millions to American taxpayers, they are now costing American lives.