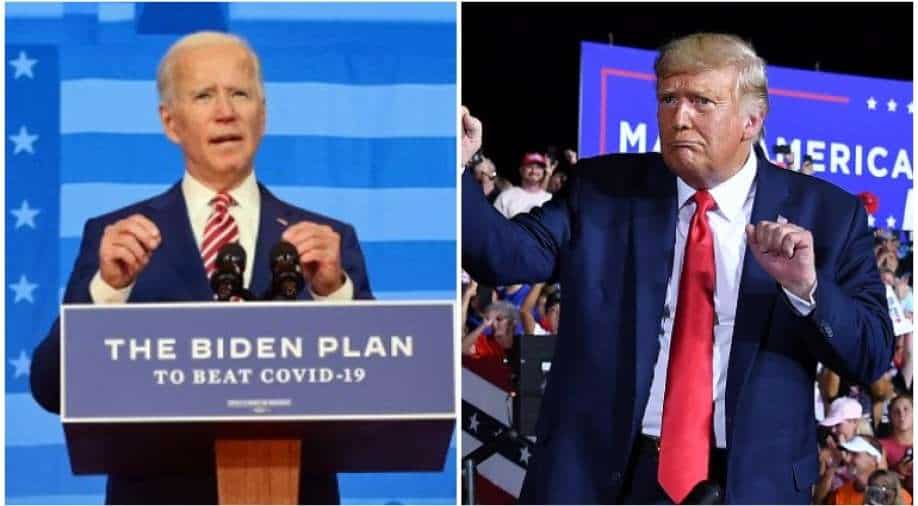 On Sunday, Trump made appearances in Iowa and Michigan, while Biden in pivotal Pennsylvania implored his supporters to turn out to vote.

Two days before the November 3 vote, US President Donald Trump and his Democratic rival Joe Biden raced against time across the battleground states to make themselves heard.

On Sunday, Trump made appearances in Iowa and Michigan, while Biden in pivotal Pennsylvania implored his supporters to turn out to vote.

Trump is aiming to avoid becoming the first incumbent president to lose a re-election bid since fellow Republican George HW Bush in 1992. He has a frenetic schedule for Sunday, with stops also planned in North Carolina, Georgia and Florida.

Biden leads in national opinion polls though the race is seen as close in enough battleground states that Trump could achieve the 270 votes needed to win in the state-by-state Electoral College that determines the overall victor.

The former vice president made the latest in a series of appearances in closely contested Pennsylvania, the state where he was born.

"We have to earn our democracy. We have to get out and vote," Biden said at a drive-in rally in a parking lot outside a Philadelphia church, with supporters honking their car horns.

"We're at an inflection point. So we have to vote like we never did before. Every day - every day - is a new reminder of how high the stakes are, of how far the other side will go to try to suppress the turnout, especially here in Philadelphia," Biden added.

Buffeted by snow flurries in Washington, a town north of Detroit, in his first appearance of the day Trump wore his trademark red cap emblazoned with the words "Make America Great Again" and was bundled up in an overcoat as he addressed a boisterous crowd on a cold and blustery morning.

After the crowd loudly chanted, "We love you" Trump responded, "I love you, too. If I didn't, I wouldn't be standing here because it's freezing out here."

"You better get out there and vote," Trump told the crowd.

Trump predicted he would repeat his 2016 victory in Michigan and touted his efforts to create auto jobs, a key issue for the auto manufacturing state.

Trump then addressed another spirited rally in windy Dubuque, where he made his pitch to Iowa farmers in the important corn-growing state and predicted he would win there as he did four years ago.

Biden was ahead 51% to 43% nationally in the latest Reuters/Ipsos poll, taken October 27-29. A coronavirus pandemic that has killed more than 230,000 Americans and battered the economy has weighed on Trump's campaign.

In his 2016 victory over Democrat Hillary Clinton, the real estate developer and reality TV personality-turned-politician took Pennsylvania and Wisconsin as well as Michigan, states that for decades had gone in the Democratic column.

Biden underscored the importance of Pennsylvania in Tuesday's election.

"President trump is terrified what will happen in Pennsylvania. He knows that if you get to have your say, he doesn't stand a chance," Biden told the Philadelphia event.

"There's too much on the line to sit it out," Biden added. "We only have two more days. In two more days, we can put an end to this presidency that has from the very beginning sought to divide us, to tear us apart."

Biden is scheduled to appear again on Monday in Pennsylvania and added a stop in Ohio on Monday, indicating his campaign views that Midwestern state as winnable.

A record-setting 93 million early votes have already cast either in-person or by mail -- something that stands to boost Biden's chances.

Trump is due to stage 10 rallies - five a day - on Sunday and Monday, the campaign's busiest stretch, with Monday appearances planned in North Carolina, Pennsylvania, Wisconsin and back in Michigan.

Hitting on familiar themes, Trump portrayed himself as running against "a corrupt politician" and "a dummy and a half" in Biden as well as a "left-wing mob" and Democratic "maniacs." Both men have previously mused about physically striking one another.

The contest has proven unexpectedly close in Texas, typically a reliable Republican state.