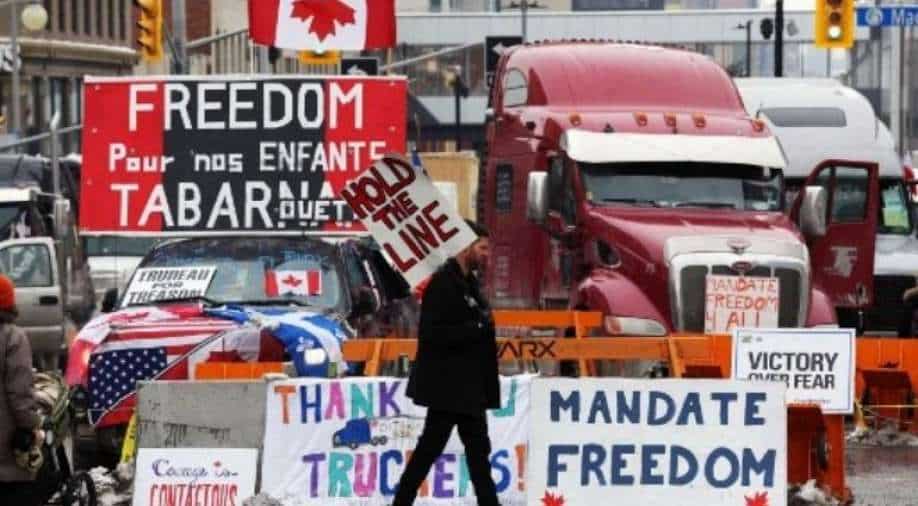 Several provinces including Alberta, Quebec and Saskatchewan this week announced a gradual lifting or loosening of COVID-19 restrictions.  Photograph:( AFP )

The so-called "Freedom Convoy" began last month in western Canada -- launched in anger at requirements that truckers either be vaccinated, or test and isolate, when crossing the US-Canada border

With more people joining the blockade of the Ambassador Bridge between Windsor and the US city of Detroit in solidarity with the two-week long truckers protest in the Canadian capital, Trudeau warned the action threatens the country's economic recovery.

"Blockades, illegal demonstrations are unacceptable, and are negatively impacting businesses and manufacturers," Trudeau said in the House of Commons. "We must do everything to bring them to an end."

Psaki also expressed concerns about the impacts of the protests on the US economy, saying the action "poses a risk to supply chains, to the auto industry."

The Ambassador suspension bridge is a key trade corridor, with more than 40,000 commuters, tourists and trucks carrying US$323 million worth of goods across the span each day.

Several Canadian and American chambers of commerce and industry associations, in a joint statement, demanded the bridge be cleared, saying, "as our economies emerge from the impacts of the pandemic we cannot allow any group to undermine the cross-border trade."

Another trade link between Coutts, Alberta and Sweet Grass, Montana has also been blocked by protesters for several days.

By Wednesday evening, the atmosphere on the streets of downtown Ottawa was one of protest and celebration.

"We're not going anywhere," said trucker John Deelstra, smiling from behind the wheel of his big rig, which has been at the demonstration since day one.

Planted not far away, Ontario trucker Lloyd Brubacher offered up the same steely resolve: "I'm not going anywhere," he told AFP, adding that he planned "to fight to the bitter end."

Some 400 vehicles are still camped on Parliament Hill below Trudeau's offices, against a backdrop of barbecues, campfires and music.

"This is a dramatic situation that is impacting the wellbeing of Canada's relationship with the United States and impacts immensely how business is able to conduct its operations," University of Ottawa professor Gilles LeVasseur told AFP.

The so-called "Freedom Convoy" began last month in western Canada -- launched in anger at requirements that truckers either be vaccinated, or test and isolate, when crossing the US-Canada border.

Having snowballed into an occupation of Canada's capital, the protest has sparked solidarity rallies across the nation and abroad.

On Wednesday, Ottawa police warned protesters they could face criminal charges and their trucks could be seized if they continue their "unlawful" clogging of downtown streets.

Michelle Krebs, a senior analyst with Autotrader in Detroit, explained that North American assembly plants rely on timely parts deliveries across the bridge.

The auto sector "is a significant portion of the economy and an important portion of consumer spending" that has been hard hit over the past year, she said.

Canada's Public Safety Minister Marco Mendicino warned of "serious dangers for the economy" and called on protesters to "go home!"

"This is an illegal economic blockade... against all Canadians," added Transport Minister Omar Alghabra.

Several provinces including Alberta, Quebec and Saskatchewan this week announced a gradual lifting or loosening of COVID-19 restrictions.

A Canadian court on Monday ordered the truckers to stop incessant honking that upset residents and made sleep difficult.

But the noise is spreading: Similar movements have hatched everywhere from New York to New Zealand.

In France, thousands of protesters inspired by the Canadian truckers plan to converge on Paris Friday evening, with some aiming to move onwards to Brussels Monday.