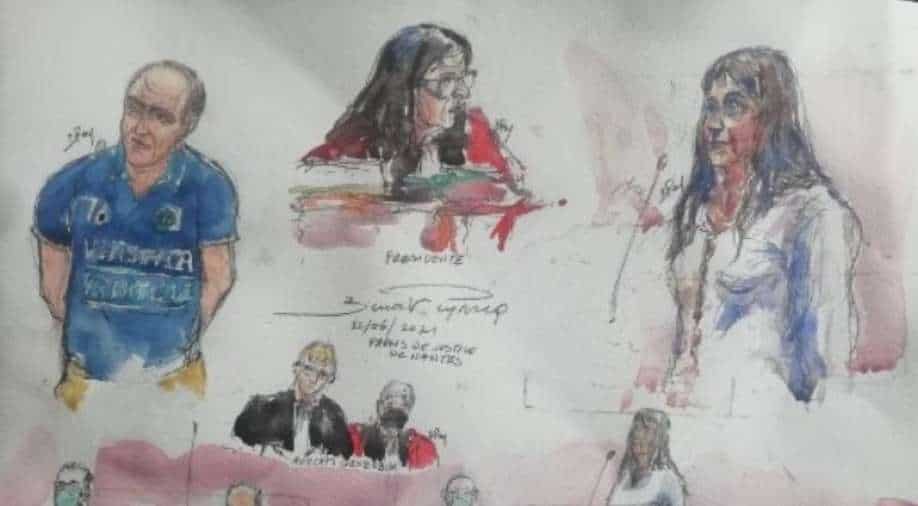 A courtroom sketch made on June 22, 2021 shows main accused Hubert Caouissin (L) and co-accused Lydie Traodec (R) at Nantes' courthouse, on the opening day of the trial of the so-called "Troadec case" in Nantes. (File Photo) Photograph:( AFP )

A 50-year-old man in France has been sentenced for 30 years in prison after he killed four members of his family over 'Nazi gold'.

Hubert Caouissin appeared before the Loire-Atlantique Assize Court on Wednesday and admitted that he convinced that the family was sitting on a rumoured inheritance of gold bars and coins and cheating his wife Lydie, Troadec’s sister, out of what he believed was her fair share.

Following seven hours of deliberations, the jury accepted the argument of Caouissin's lawyer of diminished responsibility, resulting in a punishment that fell short of the life sentence demanded by prosecutors.

For interfering with a crime scene and concealing a corpse, Caouissin's ex-wife Lydie Troadec, 52, received three years' imprisonment, one suspended.

At their home in Orvault near Nantes on the night of 16-17 February 2017, Caouissin killed Brigitte and Pascal Troadec, both 49, as well as Charlotte Troadec, 18, and Sebastien Troadec, 21.

His next step was to meticulously dismember the bodies at his farm, throwing muscles and organs into bushes in order to be eaten by animals and trying to burn skin, bones, and fat in the oven.

In his account, he said he visited the family in Orvault trying to find "information" about the hoard, and then he killed the victims in self-defence.

The accused has been diagnosed with "chronic paranoid delusions" by psychologists and psychiatrists, according to his lawyer Thierry Fillion.

Caouissin's defence lawyers urged jurors not to sentence him for life based on the diagnosis.