Tributes pour in for former US president George HW Bush 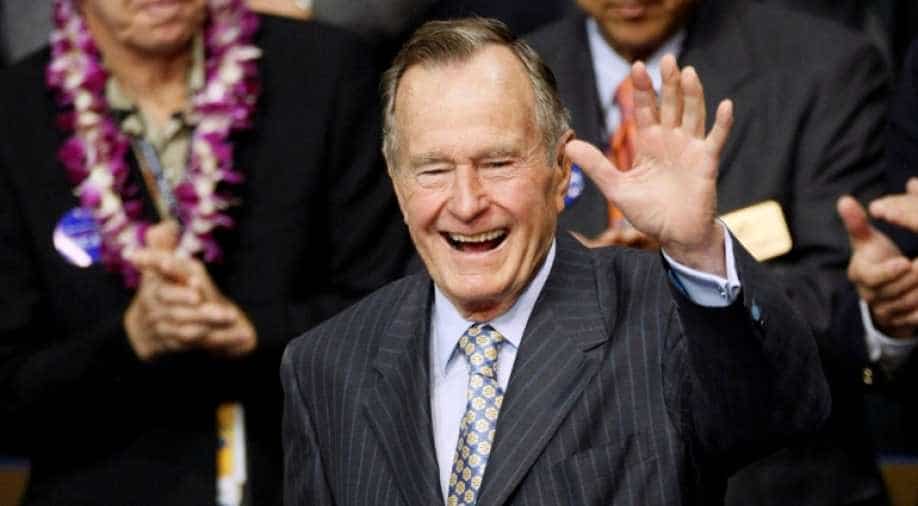 'George HW Bush was a man of the highest character and the best dad a son or daughter could ask for, ' son and former president George W Bush said.

Former US president  George HW Bush, who led US as Cold War ended but failed to get a second term, died on November 30 at the age of 94 on Saturday.

His death was announced in a statement issued by longtime spokesman Jim McGrath.

Following the leader's demise tributes poured in from various people.

In pics: Life and times of former US president George H W Bush

Here are excerpts of messages from the worlds of politics, business and Hollywood:

"George HW Bush was a man of the highest character and the best dad a son or daughter could ask for."

"Through his essential authenticity, disarming wit, and unwavering commitment to faith, family, and country, President Bush inspired generations of his fellow Americans to public service."

"I am profoundly grateful for every minute I spent with President Bush and will always hold our friendship as one of my life's greatest gifts."

- Former US president Bill Clinton, who defeated Bush in the 1992 election

"We had the chance to work together during the time of enormous changes. And this was a dramatic time which called for huge responsibility from everyone. The result was the end of the Cold War and the arms race... He was a true partner."

"George HW Bush's life is a testament to the notion that public service is a noble, joyous calling. (...) It's a legacy of service that may never be matched, even though he'd want all of us to try."

'Example to us all'

"President George H.W. Bush's ethos of public service was the guiding thread of his life and an example to us all. (...) Today Britain remembers a great statesman and a true friend of our country."

"I feel privileged to have worked with him, and even more privileged that he became a lifelong friend. He was, quite simply, one of the most deep down decent people I have ever known."

'We will never forget'

"In 1989, at a time of upheaval and challenges, when the blocs were staggering and the decades-long confrontation was beginning to crumble, he bravely seized the opportunity to end the Cold War. He is among the architects of German unity. We will never forget that."

"He was a world leader, who strongly supported the alliance with Europe. Our sympathy to his family and beloved ones."

"President Bush has left us for one last flight but his destination isn't unknown. He's flying into the arms of the love of his life, Barbara."

"We have lost a great American. Service defined President George HW Bush's life, and he taught all of us about leadership, sacrifice and decency."