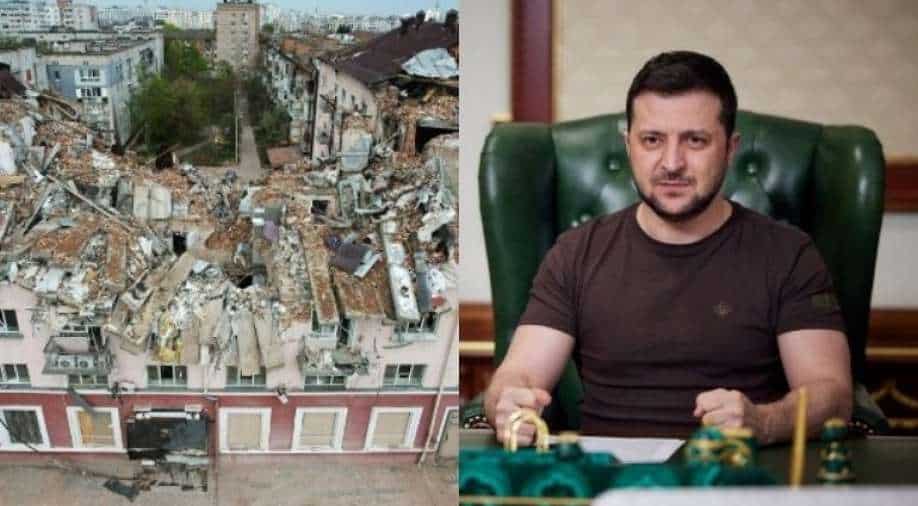 Zelenskiy, in a video address to a medical charity group, said many places lacked even basic antibiotics in eastern and southern Ukraine, the focal points of the fighting. Photograph:( WION Web Team )

According to the Kyiv School of Economics, Russian aggression costs Ukraine $4.5 billion per week, as bombs destroy thousands of buildings, public infrastructure, and kilometres of road

Kyiv has suffered a great deal as a result of the Russian-Ukraine conflict. From the humanitarian cost of lives lost to the destruction of homes and buildings.

To rebuild the country's lost infrastructure and to help his country win the war against Moscow, Ukraine's President Volodymyr Zelensky on Thursday launched a global crowdfunding platform.

Also read | Will Russia declare all-out war in Ukraine on May 9? Find out what Kremlin has to say

"Every donation matters for victory."

In a video that was posted to his Twitter page, President Zelensky launched the United24 platform and said in English, "in one click, you can donate funds to protect our defenders, to save our civilians and to rebuild Ukraine."

Its 1st component is an online platform to raise funds in support of 🇺🇦. Other projects & programs will be added soon.

You can make a donation in 1 click from any country.

Two months since the start of the Russian invasion, Ukraine has suffered large scale destruction amounting to billions.

According to the Kyiv School of Economics, Russian aggression costs Ukraine $4.5 billion per week, as bombs destroy thousands of buildings, public infrastructure, and kilometres of road.

Since Vladimir Putin launched the assault in February, the total cost of direct infrastructure damage has risen to $92 billion.

Earlier too, the country had launched fundraising efforts. In March the country launched an "Aid for Ukraine" website on which donors could contribute in 10 cryptocurrencies including Bitcoin and ether.

Thanks @FinancialTimes & @CristinaCriddle! "As the war has continued, the government has refined its approach. This week, it launched an official @_AidForUkraine website"#HelpUkraineWithCrypto at https://t.co/nEFnqSk4Pw https://t.co/hI0eHG81He pic.twitter.com/RsMuOuIEhn

On March 19, the campaign's official website tweeted, "Over $60M contributed, with $10M donated in a few days!"

Calling on the ordinary people of the world to help Ukraine, Zelensky said "all funds will be transferred to the national bank of Ukraine and allocated to the relevant ministries.

As per him, an update about the money's usage will be given by his government every day.