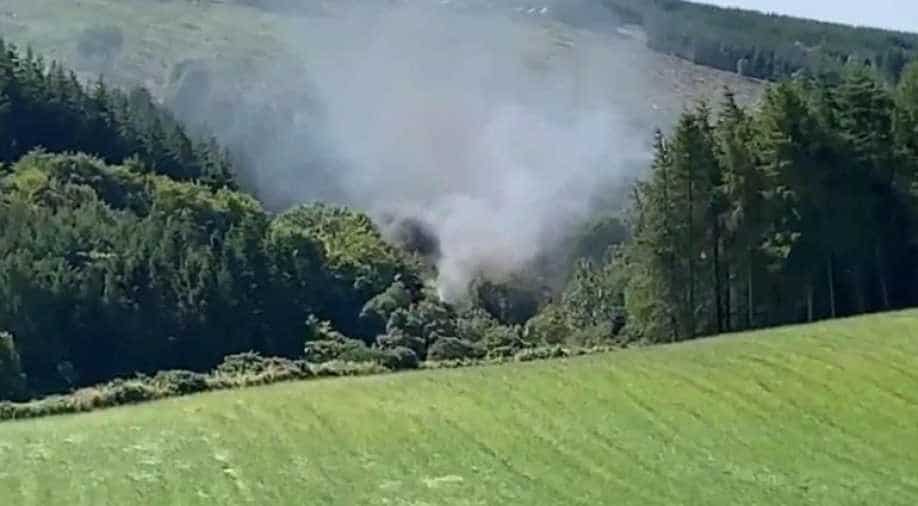 Smoke seen billowing from the train near Stonehaven in Aberdeenshire Photograph:( AFP )

The crash, close to the town of Stonehaven around 25 kilometres south of Aberdeen, followed severe flooding across parts of the region overnight.

A passenger train derailed in northeast Scotland on Wednesday, with reports of "serious injuries" in what First Minister Nicola Sturgeon described as "an extremely serious incident".

"I've had an initial report from Network Rail and the emergency services and am being kept updated. All my thoughts are with those involved," she said.

The crash, close to the town of Stonehaven around 25 kilometres south of Aberdeen, followed severe flooding across parts of the region overnight. At least three people died after carriages overturned and piled on top of each other on a steep wooded slope British Prime Minister Boris Johnson also took to twitter to express his grief and condolences to the victims of the accident.

I am saddened to learn of the very serious incident in Aberdeenshire and my thoughts are with all of those affected. My thanks to the emergency services at the scene.

Video footage on social media showed smoke rising from the scene on the east coast of the country. Some 30 emergency vehicles were attending the scene of the derailment which happened at 9:40am.

Firefighters and paramedics rushed after reports of serious injuries following a train derailment in near Stonehaven in Scotland. Over 30 emergency vehicles are at the scene. WION's London Bureau chief @IntrepidMandy joins with the latest@alysonle pic.twitter.com/bjYuGXKmId

Network Rail Scotland, the company which looks after the rail infrastructure, said it was working alongside emergency services.

"It is too early to confirm the exact nature and severity of the incident and more details will be made available once known," it said.

Local MP Andrew Bowie said a "major emergency service response" was underway and he had spoken to the British transport minister, Grant Shapps, about the incident.

Thunderstorms and torrential rain had battered parts of central and eastern Scotland overnight.