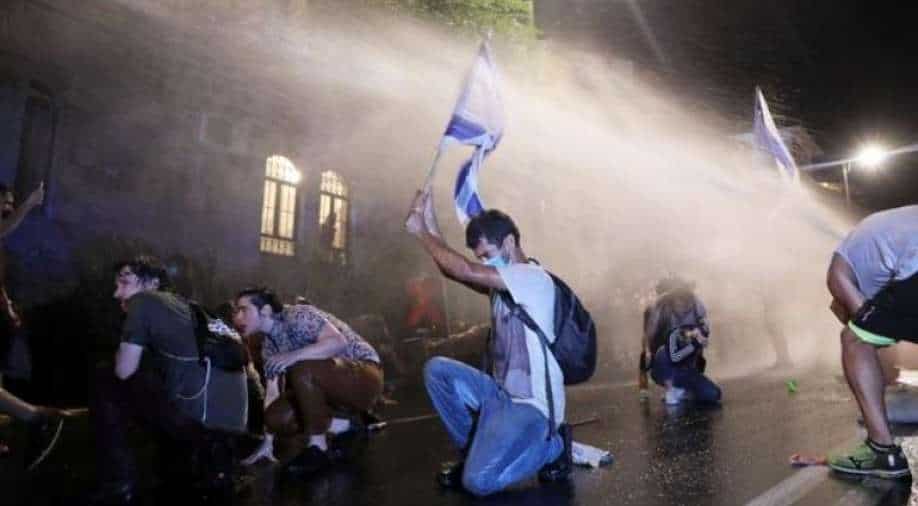 Israel has faced two nationwide, strict lockdowns to contain the spread of the novel coronavirus

Continuing months-long protests in the country, locals gathered outside the official residence of the Israeli Prime Minister Benjamin Netanyahu in Jerusalem seeking his resignation from the post.

The roads outside Netanyahu's residence were jammed by nearly 1,000 protestors who marched demanding his resignation following allegations of corruption.

Locals have been conducting weekly protests outside the PM's residence for the past few months. They are also protesting against the alleged strict and 'not necessary' coronavirus lockdown rules, which has left many locals jobless and without a minimum wage.

Israel has faced two nationwide, strict lockdowns to contain the spread of the novel coronavirus. The protestors claim the Netanyahu government has left them high and dry by imposing a lockdown but not providing any financial security. Many claimed massive losses in business and job losses due to the stretched lockdowns. They complain that the government failed to initiate proper processes and planning for providing financial assistance to the sufferers of the lockdown in the pandemic.

These demonstrations have been ongoing for the past six months, and have now shrunk in number — which can be due to negative (or no) outcome and the advent arrival of the winter season that has sent chills down the spine of many people.

While the number of protestors has seemingly decreased, the demonstrators present outside the PM's house were spotted wearing masks. However, people did not maintain the required social distance which attracted some criticism.

Many protestors held Israeli flags, and some were also spotted with pink flags — which has emerged as a popular symbol of protest in the country in the past few months. Others hoisted model submarines, a reference to a scandal over an Israeli purchase of German submarines in which several Netanyahu associates have been implicated.

The protestors are demanding Netanyahu's resignation from his long-reigning position of a Prime Minister, after he has been accused of corruption. The Defence Minister Benny Gantz, meanwhile, has ordered an investigation into this issue in the last week.