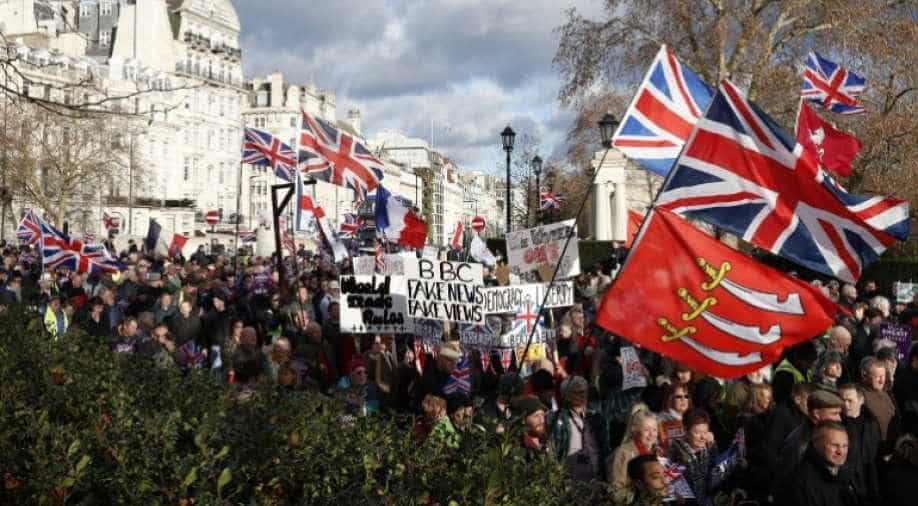 The pro-Brexit march through London, dubbed the 'Brexit Betrayal' march, was met by a counter-protest at the same time but taking different routes.

Ahead of a crucial vote on Britain's divorce deal with the European Union (EU), thousands of protesters marched through London in support of Brexit on Sunday amid tight security measures in place by Scotland Yard.

The pro-Brexit march through London, dubbed the "Brexit Betrayal" march, was met by a counter-protest at the same time but taking different routes.

The Metropolitan Police had earlier urged protesters to keep their demonstrations peaceful but indicated it is taking no chances against the backdrop of some violent clashes during the "Yellow Vests" street protests in the neighbouring French city of Paris over the weekend.

The march comes days before a crunch vote in the Parliament on the Withdrawal Agreement struck by Prime Minister Theresa May's government with the European Union on December 11.

May on Sunday warned that parliament's rejection of her Brexit deal could leave Britain in the EU and bring the opposition Labour Party to power.

Britain is scheduled to leave the EU on March 29 next year under the Article 50 process set in motion after the referendum over two years ago.

Under the deal struck by the British prime minister with the EU, the UK would be able to negotiate trade deals with other countries, including India, during the transition period after Brexit day, but would not be able to implement them until the end of the planned 21-month transition period, which itself could be extended.

May is facing her biggest crisis since coming to power a month after Britain voted by a 52-48 margin in June 2016 to leave the EU after 46 years.

Commenting on Sunday's protests, Met Police Deputy Assistant Commissioner Laurence Taylor said, "the right to protest is a fundamental right in our democratic society, but this right must be balanced against the right of people to go about their day without fear of violence, disorder or disruption."

"Experience has shown us that when groups with conflicting views come together it can create tension and disorder, not just on the day itself but in the longer term,? he said, adding that the force would "adopt a robust arrest policy on anyone who attends and is intent on violence and disorder".

The Met Police has said it would keep the two rival sides apart by issuing two separate routes for them to follow through the West End. The conditions have been imposed under Section 12 and 14 of the UK's Public Order Act, 1986.

Far-right group English Defence League (EDL) founder Tommy Robinson has joined the pro-Brexit march called by the anti-Europe UK Independence Party (UKIP), with the counter-protesters including groups like Unite Against Fascism and grassroots group Momentum rallying together against the "far-right extremists".

UKIP said its march against the "Brexit Betrayal" would be "the largest pro-Brexit event of the year".

Some of their banners refer to politicians committing "treason", also referring to the British prime minister, Theresa May, "Treason May".

"Be there to show you want to Dump the Deal and that Brexit means Exit," said UKIP leader Gerard Batten, who has angered members of his own party by appointing Robinson as an adviser.

UKIP's prominent former leader, Nigel Farage, had stepped down from the party recently expressing his anger at the party's swing towards extreme right-wing politics.

"This march isn't about Brexit, it's about far-right extremists dressing up in suits and pretending to be respectable," said Opposition Labour Party's shadow chancellor John McDonnell, as he called on people to take to the streets against the poison of the far-right.

Meanwhile, a rally is also taking place in London organised by pro-EU group Best for Britain and the People's Vote campaign for another referendum to revisit the June 2016 vote in favour of Brexit ahead of a crucial House of Commons vote on Prime Minister May's controversial Withdrawal Agreement struck with the European Union.