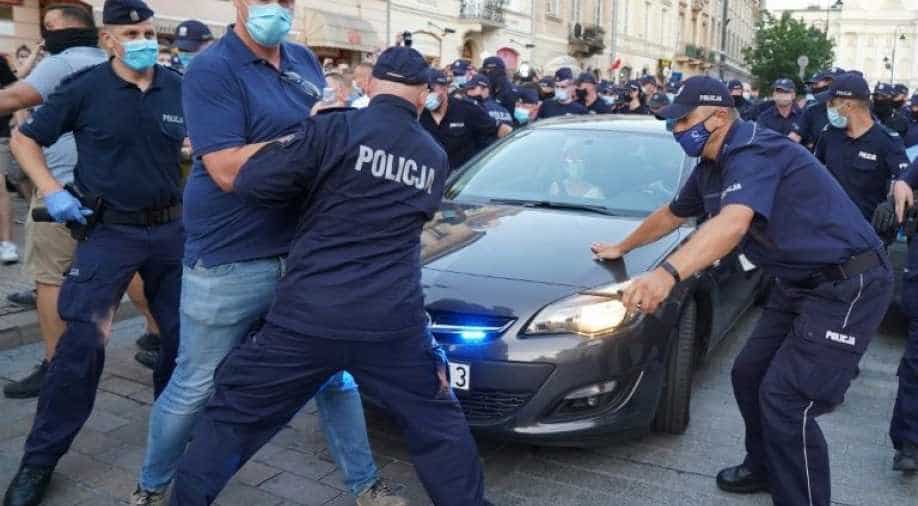 Thousands of people protested across Poland on Saturday waving rainbow flags, a day after a gay rights activist was taken into custody for two months of pre-trial detention.

The biggest solidarity protest on Saturday was outside the Soviet-era Palace of Culture in Warsaw, where an AFP photographer saw several thousand people -- some holding umbrellas with LGBT flags on them.

"We are meeting to protest together against violence and systemic homophobia," the organisers, a coalition of gay rights groups, said in a statement.

"Empathy, Solidarity, Action!" read one of the placards, while some protesters chanted slogans against the police and others shouted "you'll never walk alone!" -- addressing the arrested campaigner.

In Lublin, a city southeast of Warsaw that has declared itself an "LGBT-free zone", a small group of mostly young campaigners marched through the centre and rallied outside the local prosecutor's office.

"Gay By Birth, Proud By Choice" and "Solidarity is Our Weapon", read some of the signs at the rally where campaigners also carried rainbow flag bags and balloons.

"We are tired of this government," said Julia, 17, who declined to giver her full name for fear of reprisals.

Homophobia is still widespread in the devout Catholic country whose right-wing governing Law and Justice party has repeatedly used anti-gay rhetoric, including in the run-up to last month's presidential election.

President Andrzej Duda has campaigned against what he calls "LGBT ideology", likening it to communism.

At his swearing-in ceremony in parliament on Thursday, leftist MPs wore the colours of the rainbow flag.

The flag has become an emblem of anti-government sentiment in Poland, particularly in recent months.

The activist who was arrested on Friday, referred to officially in court as Michal Sz, belongs to a campaign group called "Stop the Nonsense" that claimed responsibility for the monument flag protest.

But the arrest was linked to a separate case from June of criminal damage to a van of the Pro-Right to Life Foundation that was covered in homophobic slogans.

After Margot was detained at the offices of Campaign Against Homophobia, an AFP photographer saw dozens of protesters blocking the police car carrying her.

There were scuffles with dozens of police officers, who eventually cleared the way for the car to pass.

Warsaw police said on Twitter that 48 people were arrested in connection with "insults directed at police as well as damage to a police car".

Margot called this type of pre-trial detention, which is normally used to prevent another crime being committed, a "repressive" measure, in comments to the PAP news agency before her arrest.

Her arrest prompted outrage from opposition politicians and rights groups.

Mijatovic tweeted that the activist was detained "for blocking an anti-LGBT hate van and putting rainbow flags on Warsaw monuments," adding that an order for Margot's two-month detention sends a "very chilling signal" for freedom of speech and LGBT rights in Poland.

Hanna-Gill Piatek, a leftist lawmaker, was at the scene of Margot's arrest.

"I wish serious criminals were prosecuted as diligently as activists," she said.