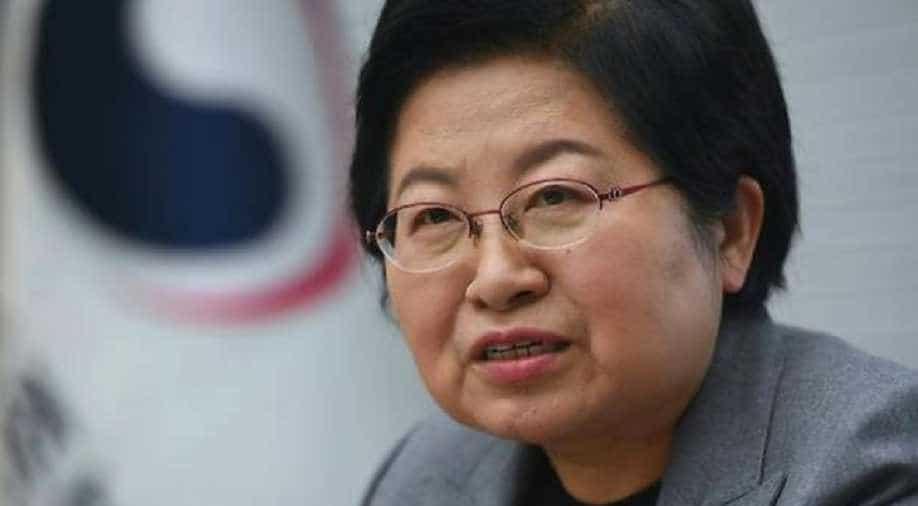 The woman appointed to try to reverse the world's lowest birth rates knows better than most why billion-dollar campaigns to encourage South Korea's female populace to procreate have failed -- she is among the millions who have chosen to remain childless in the face of traditionalist social expectations.

A history professor at a Seoul University before joining the government, family minister Chung Hyun-Back says she remained single to pursue her professional ambitions.

Entrenched gender roles at home and a workaholic culture are pushing the next generation of South Korean women to follow suit, warned the 64-year-old.

"It was extremely difficult -- if not impossible -- to juggle an academic career while getting married and raising children," she explained, pointing out that many female professors in their 50s and 60s are single.

Rapid economic growth over several decades has seen South Korea's GDP boom, but birth rates have gone in the opposite direction.

The country's fertility rate -- an average number of babies women are expected to have in their lifetime -- stood at 1.17 in 2016, the lowest in the world and compared to a global average of 2.4.

The trend, coupled with the rapid ageing of its 50-million populace, casts a pall over the nation's future -- its population is projected to start shrinking in 2050.

But Chung told AFP: "For years, we have overlooked the real culprit of the problem -- our country's vast gender disparity and inhumanely long working hours."

South Korea has the second-highest average working hours in the OECD but women are still expected to be children's primary caregiver, whether they work or not.

Many firms prefer to drive pregnant staff to resign rather than pay for maternity leave, and those who return to work are seen as having damaged their career prospects.

"Under such unfair circumstances, young women usually choose their career, not marriage and childbirth," says Chung.

The phenomenon has been dubbed a "birth strike".

"Unless we tackle these problems head-on, South Korea's future will remain murky with the young generation staying away from marriage -- not to mention childbirth," said Chung.

A recent survey showed 68 percent of female college students intended to marry -- compared to 80 percent for males. Dual burdens at home and work were the top concern cited by the women who did not intend to marry.

Among the world's advanced economies South Korea consistently ranks at the bottom of OECD surveys on gender pay gaps or female presence in senior positions.

Yet the reverse is true in education: girls beat boys in scholastic achievement tests, with about 75 percent of them going to college compared to 67 percent for their male counterparts.

About 70 percent of South Korean women in their 20s have jobs, compared to 60 percent of men.

But in their 30s the female employment rate dives to about 55 percent, far below males' 90 percent.

Many bemoan the double load on working mothers.

"My male bosses complain that their working wives are selfish and too ambitious at work if the wives fail to pick up children from daycare on time," said one online commentator.

"When I leave work on time to pick up my own kids, they also complain that women are useless, selfish and lack career ambition."

Even in dual-income households women spend more than three hours on household chores and childcare a day on average -- compared to a mere 44 minutes by men.

Marriage is "nothing but a graveyard for all smart, aspirant women out there", said another poster.

Seoul has mounted billion-dollar campaigns in a effort to reverse the decline, but the drives have been criticised for doing little more than preach at women to marry and reproduce -- in one notorious instance, an online "birth map" showed the number of women of childbearing age by district, city, and region.

At his New Year press conference left-leaning President Moon Jae-In said his government would reduce working hours and "strive to build a society where women can still lead their life pursuing their own values when they get married, give birth and raise children".

Five of the 19 members of the cabinet are women, a record high of 28 percent, including Chung and Kang Kyung-Wha, the country's first female foreign minister.

Seoul has also set non-binding quotas for women in senior roles at state agencies and state-run companies, and increased financial support for men taking paternity leave and their employers, while rolling out more benefits for long-stigmatised unwed mothers.

The government hopes that by changing the wider social atmosphere, private firms will be encouraged to follow suit.

Chung conceded it will be a challenge to change the view that "childcare is women's work" but warned: "Our country's future may depend on whether we can break these social customs."