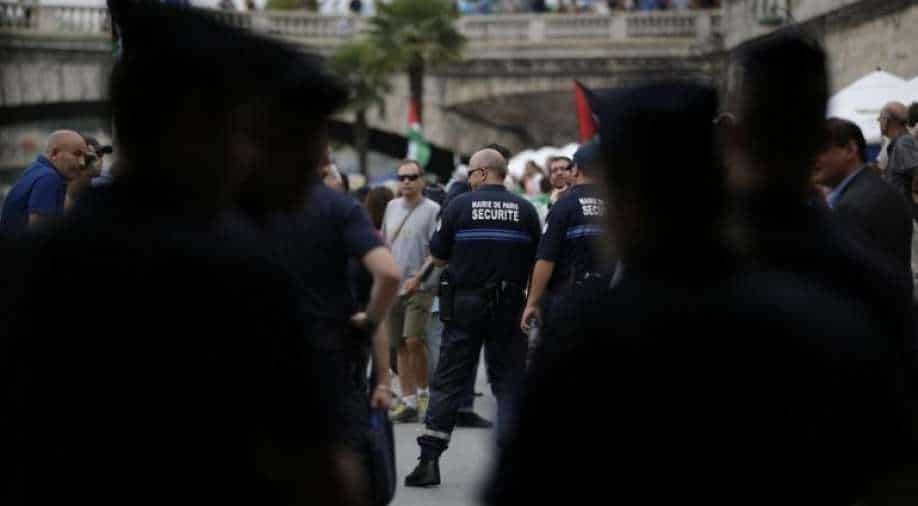 A handful of garbage bins were set on fire and rocks and other projectiles were hurled toward police, but no arrests were reported

Paris police used tear gas and water cannon Saturday to disperse a pro-Palestinian rally held despite a ban by authorities, who feared a flare-up of anti-Semitic violence during the worst fighting between Israel and Hamas in years.

Several hundreds of people converged on the heavily immigrant Barbes neighbourhood in the north of the capital, amid a massive security presence involving some 4,200 officers, officials said.

Police blocked off wide boulevards as well as narrow streets where some of the protesters were forced to retreat, while knots of residents and passers-by watched or recorded the scene with their phones.

Some threw stones or tried to set up roadblocks with construction barriers, but for the most part, police pursued groups across the district while preventing any march toward the Place de la Bastille as planned.

"You want to prohibit me from showing solidarity with my people, even as my village is being bombed?" Mohammed, 23 and wearing a "Free Palestine" t-shirt, told AFP.

As a cold rainstorm settled over the city toward evening, many protesters left, leaving a large group of mostly young men facing off against ranks of officers who held their ground on a stretch of boulevard.

A handful of garbage bins were set on fire and rocks and other projectiles were hurled toward police, but no arrests were reported.

The march was banned Thursday over concerns of a repeat of fierce clashes that erupted at a similar Paris march during the last war in 2014 when protesters took aim at synagogues and other Israeli and Jewish targets.

"We all remember that extremely troubling protest where terrible phrases like 'death to Jews' were yelled," Mayor Anne Hidalgo told AFP on Friday, welcoming a "wise" decision to ban the march.

But Walid Atallah, president of the Association of Palestinians in Ile-de-France, the region encompassing Paris, accused the government of inflaming tensions with the ban.

"If there were genuine risks of public disorder, of serious problems, they would have prohibited it right away," he told a press conference ahead of the march.

"They banned it at the last minute, it's unacceptable," he said. Similar protests in Germany and Denmark this week have degenerated into clashes leading to several arrests.

The protest had originally been called to mark the Nakba, as Palestinians call the "catastrophe" of Israel's creation in 1948, which turned hundreds of thousands into refugees.

But a Paris court upheld the ban Friday, saying the "international and domestic context" justified fears of unrest "that could be as serious or even worse than in 2014."

Interior Minister Gerard Darmanin also called for similar bans in other cities if necessary, and officials prohibited marches in Nice, where around 150 people gathered nonetheless, and in some Paris suburbs.

"We don't want scenes of violence, we don't want to import a conflict onto French soil, we don't want eruptions of hate on our streets," government spokesman Gabriel Attal said Saturday in Marseille.

But no incidents were reported as thousands of people gathered for protests and marches in several other cities including Montpellier, Toulouse and Bordeaux. Many accuse France of being too favourable toward Israel in the latest conflict, which has seen a barrage of rocket fire from Gaza that has been met with Israeli artillery and airstrikes.

The ban has caused a split among French politicians, with President Emmanuel Macron's centre-right party and the right-wing opposition supporting the move, but leftists calling it an unacceptable attack on freedom of expression.

Macron's office said he spoke with Israeli Prime Minister Benjamin Netanyahu on Friday, offering his "condolences for the victims of the rocket fire claimed by Hamas and other terrorist groups."

The statement said Macron urged a return to peace and "his concern about the civilian population in Gaza."

France has the largest Muslim population in Europe, with an estimated five to six million people.

It also has the largest Jewish population after Israel and the United States.