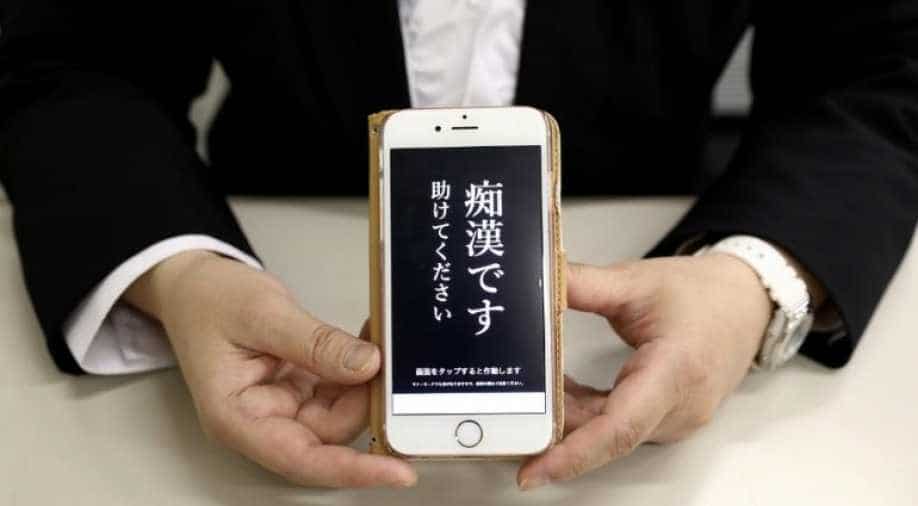 An official at a police department poses as she shows an application for scaring off molesters, in Tokyo. Photograph:( AFP )

Victims of groping can activate the Digi Police app, which either blasts out a voice shouting 'stop it' at top volume, or produces a full-screen SOS message -- which victims can show other passengers -- reading: "There is a molester. Please help."

A Tokyo police smartphone app to scare off molesters has become a smash hit in Japan, where women have long run the gauntlet of groping on packed rush-hour trains.

Victims of groping can activate the Digi Police app, which either blasts out a voice shouting "stop it" at top volume, or produces a full-screen SOS message -- which victims can show other passengers -- reading: "There is a molester. Please help."

The app has been downloaded more than 237,000 times, an "unusually high figure" for a public service app, said police official Keiko Toyamine.

"Thanks to its popularity, the number is increasing by some 10,000 every month," Toyamine told AFP.

Victims are often too scared to call out for help, she said. But by using the SOS message mode, "they can notify other passengers about groping while remaining silent".

There were nearly 900 groping and other harassment cases on Tokyo trains and subways reported in 2017, according to the latest available data from the Tokyo Metropolitan Police Department.

"But it's the tip of the iceberg," Toyamine said, with victims often hesitant to come forward.

Offenders face up to six months in jail or fines of up to $5,500 dollars. The potential jail sentence is increased to 10 years if violence or threats are used.

It initially aimed to provide information for elderly people, as well as parents and their children about scams or prowlers.

But the function to "repel molesters" was added a few months after the launch.

And an online conversation about the app -- caused by a female pop idol being assaulted late last year -- resulted in its sudden popularity.

Yui Kimura, a 27-year-old beer shop employee on the nation's northern island of Hokkaido, says she is always worried about groping whenever she visits the capital. "I tend to be vigilant on Tokyo trains as dodgy men can happen to be in front of me at any time," Kimura said.

Reina Oishi, a 21-year-old university student in Tokyo, also said: "I want to download the app as I have been groped so many times."

Experts agree that the app could be a boon for "silent" victims.

"Molesters tend to target those who appear shy and reluctant to lodge a police complaint," said Akiyoshi Saito, a certified social worker who supported some 800 former molesters during a rehabilitation programme.

Groping on trains can occur in any country where trains are frequently crowded, Saito told AFP.

"But the idea that men are superior to women, which is Japan's traditional bias, may help sustain" sexual harassment on trains in the country, he added.

Awareness of the issue has risen in Japan in recent years, with women exchanging tips on how to avoid unwanted attention online.

East Japan Railway runs women-only carriages during rush hours and has set up security cameras on some lines notorious for a high rate of groping.