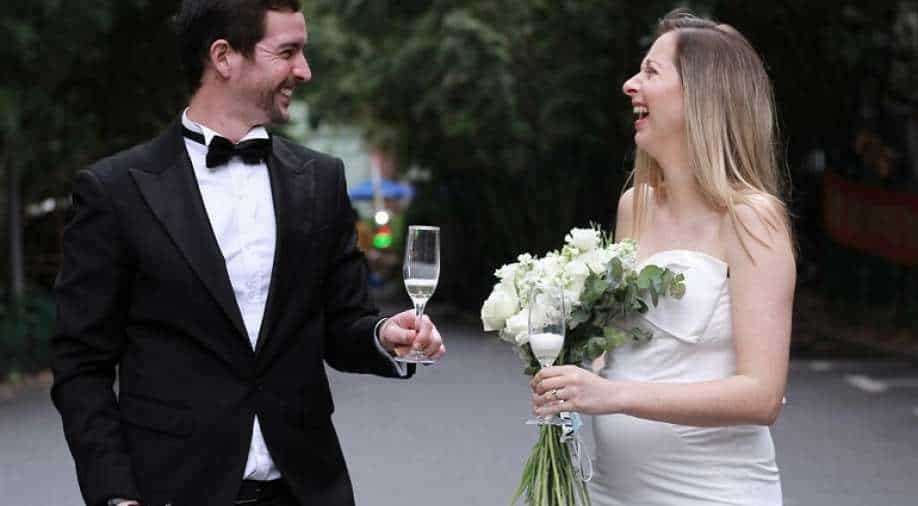 A couple braved the lockdown to get married in Shanghai Photograph:( AFP )

Although the couple decided to get married in March after they found that they were expecting a baby, it was not possible as situation got worse, and the lockdown continued without an end in sight.

The lockdown in Shanghai due to the rising COVID-19 cases has been a cause of concern for both the authorities and the citizens of the Chinese city. The lack of proper healthcare and food shortages have made life difficult for the people and the issues have even resulted in a number of protests.

However, Matthew Mitchener and Janelle Nuyts were able to brave the situation to get married in the car park of their housing compound thanks to an easing of the lockdown rules.

According to an AFP report, the ceremony took place with Nuyts dressed in a hazmat suit and blue surgical mask along with her wedding dress. The new rules allowed some people to come out of their houses and as a result, the wedding was attended by their friends who were social distancing.'

Although the couple decided to get married in March after they found that they were expecting a baby, it was not possible as situation got worse, and the lockdown continued without an end in sight.

According to the report, Mitchener had his share of doubts about arranging the wedding in the present condition, but the couple decided to go through with it along with some of their friends.

China enforced a law that prevented foreigners to get married in the country and as a result, the wedding was officiated by a US celebrant who conducted the ceremony through a Zoom call.

"It kind of snowballed," said Mitchener according to the AFP report. "The next thing we knew, we had a wedding dress arrive from our friend, and a wedding cake, a bouquet of flowers."

"Once I put the dress on, everything changed," the 33-year-old Nuyts added.

"We didn't really expect it was going to be so romantic."