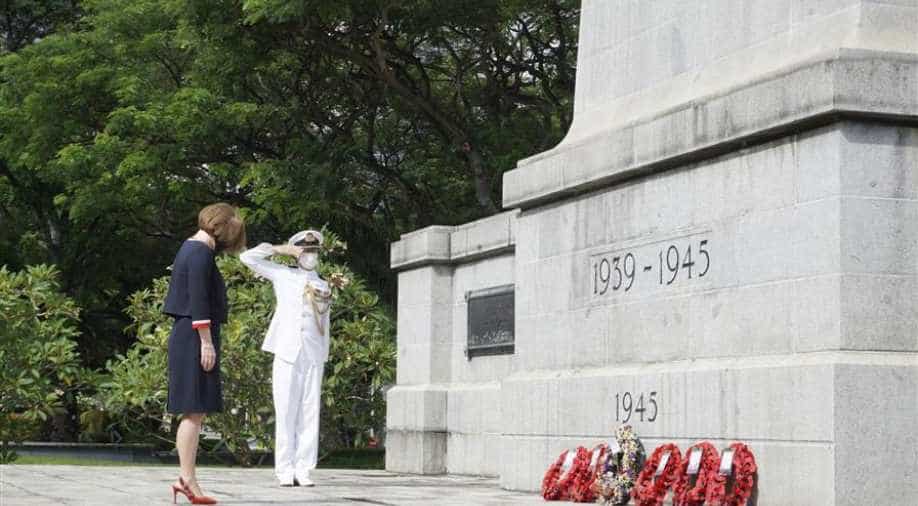 Representatives from seven former combatant nations, including India, observed the 75th anniversary of the end of the World War II at a war memorial in Singapore on Saturday.

However, the representatives from seven nations separately turned up at the Singapore Cenotaph to pay respects to the fallen due to COVID-19.

A multi-national remembrance ceremony originally planned for the anniversary at Kranji War Cemetery had to be called off due to restrictions imposed to control the spread of coronavirus.

Despite COVID-19 restrictions scuppering the remembrance ceremony, the representatives of the committee ensured that the memories of the fallen were kept alive.

The original ceremony was to comprises the High Commissions or Embassies of Australia, Canada, India, Japan, New Zealand, and the United Kingdom, and Singaporean representatives from the Battlebox, an award-winning war museum in Singapore managed by private heritage consultancy Singapore History Consultants (SHC).

High Commissioners, Ambassadors, and representatives from these seven nations -- former enemy combatants in the Pacific theatre of WWII but now close partners -- honoured the significance of the date on their own, laid wreaths at the Cenotaph at varying times.

While these nations could not come together in an official ceremony this year, the spirit of post-war reconciliation and peace was maintained, said SHC in a release.

Today's multi-national observances continue years of efforts to bring together former combatants to pay respect to the men and women who made the ultimate sacrifice in WWII.

The date, September 12, is significant because the surrender of the Japanese Southern Army to South East Asia Command in Singapore on that day in 1945 was the last major surrender ceremony of WWII.

It terminated not only Japan's military occupation of Southeast Asia, but also the Pacific War and, as a result, the Second World War.

In 2015, Japan joined the remembrance ceremony for the 70th anniversary of the End of WWII at Kranji War Cemetery.

Two years later in 2017, Japan became a member of the organising committee for the 75th anniversary of the Fall of Singapore, a move that was unanimously supported by other Commonwealth countries in the committee.

On Saturday, students of The Japanese School Singapore also made 2,000 tsuru or paper cranes symbolising peace and reconciliation. Staff members laid them alongside the wreaths at the war memorial.