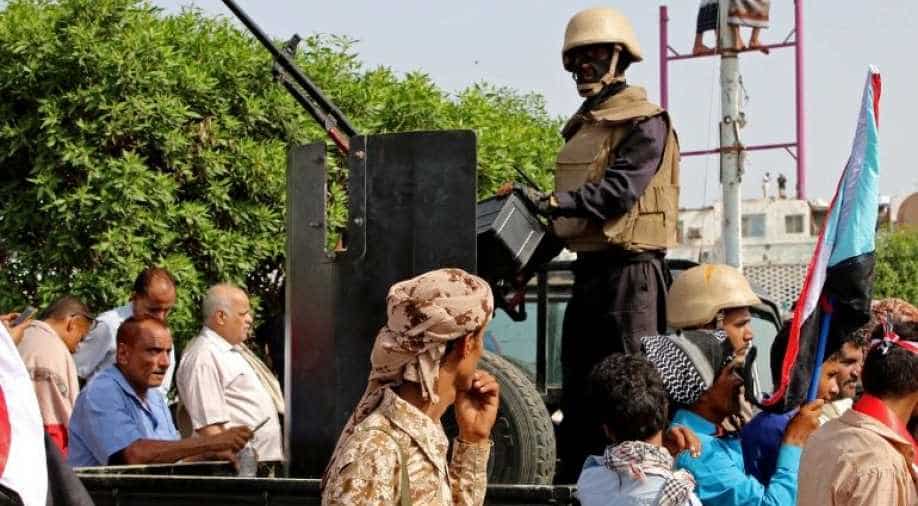 Members of UAE-backed southern Yemeni separatists forces are seen together with their supporters as they march during a rally in southern port city in Aden, Yemen. Photograph:( Reuters )

Separatists forces early this month took over the southern port of Aden, the interim seat of President Abd-Rabbu Mansour Hadi's government, and last week extended their reach to the capital of nearby Abyan.

The Saudi-led coalition fighting the Iran-aligned Houthis in Yemen moved on Monday to work out a ceasefire as nominal allies in the south of the country turned on each other in a power struggle that has fractured the military alliance.

Saudi Arabia and the United Arab Emirates, the main powers in Yemen's Sunni Muslim coalition, formed a joint committee to oversee a ceasefire between UAE-backed southern separatists and Saudi-backed government forces in the provinces of Abyan and Shabwa, said a joint statement carried on state media.

"Internal dialogue, and not fighting, is the only way to resolve internal Yemeni differences," Saudi vice minister of defence, Khalid bin Salman, tweeted on Monday.

"We are working with the UAE for security and stability in Aden, Shabwa, and Abyan and ... to unify ranks and voices to combat terrorist threats, whether from the Iran-backed Houthis or from al Qaeda and Daesh (Islamic State)," Khalid, a son of the Saudi king, said.

Separatists forces early this month took over the southern port of Aden, the interim seat of President Abd-Rabbu Mansour Hadi's government, and last week extended their reach to the capital of nearby Abyan.

Southern fighters and government forces have also clashed in the oil-producing Shabwa province.

Both sides are part of the Saudi-led, Western-backed coalition that intervened in Yemen in 2015 against the Houthis, who ousted Hadi's government from power in the capital Sanaa in late 2014.

But the UAE-backed Southern Transitional Council (STC), which seeks self-rule in the south, seized control of Aden after accusing a party allied to Hadi of being complicit in a Houthi attack on southern forces.

The standoff has exposed a rift between regional allies Saudi Arabia and the UAE, which in June scaled down its presence in Yemen under Western pressure to end the devastating war but continues to support thousands of southern separatist forces.

The violence in the south complicated UN efforts to implement peace deals elsewhere in the Arabian Peninsula state and pave the way for negotiations to end a war that has killed tens of thousands and pushed Yemen to the brink of famine.

The Saudi-UAE statement urged all parties to cooperate with the joint committee to disengage and redeploy troops and reiterated a Saudi call for a summit in the kingdom to resolve the standoff.

It also stressed the need to preserve "the interests, security, stability, independence and territorial integrity of the Yemeni people under the leadership of the legitimate president of Yemen".

Hadi’s government has said it would not participate until separatists ceded control of sites they had seized.

The separatist STC has said it would not hand over control of government military camps in Aden and other areas until the Islamist Islah party, a backbone of Hadi's government, and northerners are removed from positions of power in the south.

The Houthis, who have recently stepped up missile and drone attacks on Saudi cities, point to Aden as proof that Hadi, who resides in Riyadh, is unfit to rule.

The movement denies being a puppet of Iran and says it is fighting a corrupt system.