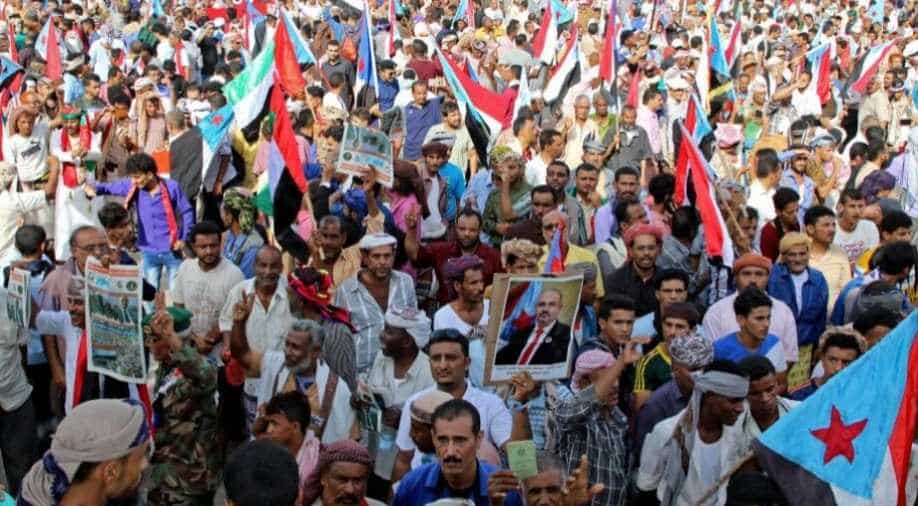 Organisers said many of the demonstrators had travelled into the city from neighbouring southern provinces to add their voice to the calls for secession.

Thousands of Yemenis marched through Aden Thursday demanding renewed independence for the south after separatist fighters drove unionist forces out of its former capital in deadly fighting last week.

The demonstrators rallied in the Khormaksar district in the heart of the sprawling port city, waving southern flags and banners proclaiming loyalty to the separatist Southern Transitional Council (STC).

Organisers said many of the demonstrators had travelled into the city from neighbouring southern provinces to add their voice to the calls for secession.

South Yemen was an independent country until it merged with the north in 1990. An armed secession bid four years later ended in occupation by northern forces, which provoked resentments that persist to this day.

Separatist forces trained and equipped by the United Arab Emirates seized the presidential palace in Aden on Saturday following days of clashes with rival, unionist forces loyal to the government of President Abedrabbo Mansour Hadi.

The clashes left at least 40 people dead and 260 wounded, according to the United Nations.

Hadi's government on Wednesday ruled out any talks with the separatists until they withdraw from the positions they seized last week.

Saudi Arabia, which has led a long and costly military intervention supporting the government against Huthi rebels from the north, has also called on the separatists to pull back to clear the way for dialogue.

But a petition signed by southern civil society organisations and trade unions called on the Saudi-led coalition to hand over the administration of the south to the separatist STC.

It urged STC chief Aidarus al-Zubaidi to declare independence and appealed for international recognition for the breakaway state.

Analysts say the break between Hadi's government and the separatists reflects a wider split between the main partners in the coalition, Riyadh and Abu Dhabi, that threatens to undermine their common battle against the Huthis.

After four and a half years of military intervention, the rebels remain in control of the capital Sanaa and much of the more populous north.

The conflict has claimed the lives of tens of thousands of people and displaced some 3.3 million. Two-thirds of the population -- some 20 million people -- require humanitarian support, according to the United Nations.