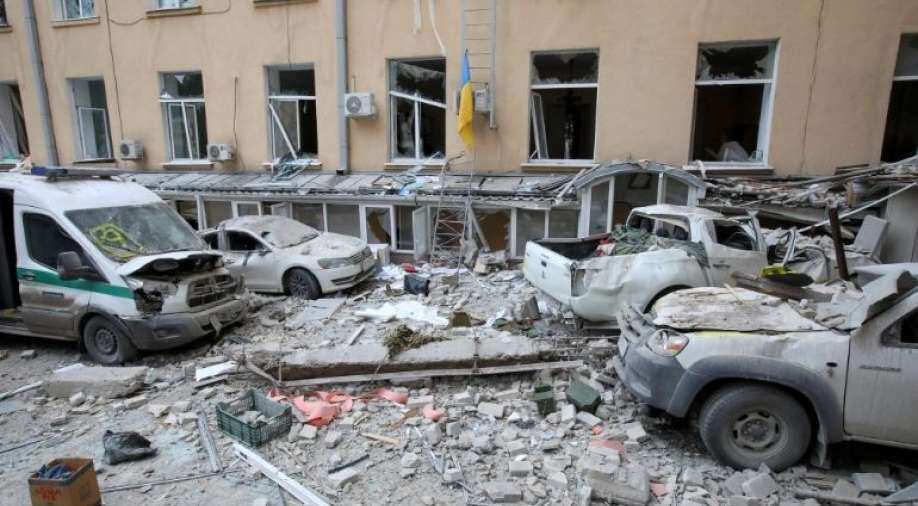 A view shows a courtyard of the regional administration building, which city officials said was hit by a missile attack, in central Kharkiv, Ukraine Photograph:( Reuters )

At least 10 people were killed and 35 wounded on Tuesday in rockets strikes by Russian forces on the centre of Kharkiv, Ukraine's second-largest city, Interior Ministry adviser Anton Herashchenko said in a post on social media

"The shelling against civilian infrastructure yesterday in Kharkiv violates the laws of war. The EU stands unwavering at the side of Ukraine in these dramatic moments," Josep Borrell said after a call with Ukraine's foreign minister.

Russian troops fired artillery at Kyiv, Kharkiv and the southern port city of Mariupol overnight while the Ukrainian side shot down Russian military planes around the capital.

In strategic Kharkiv, an eastern city with a population of about 1.5 million, videos posted online showed explosions hitting the region’s Soviet-era administrative building and residential areas.

At least 10 people were killed and 35 wounded in rockets strikes by Russian forces on the centre of Kharkiv, Ukraine's second-largest city, Interior Ministry adviser Anton Herashchenko said in a post on social media.

"The rubble is being cleared and there will be even more victims and wounded," he said.

Ukrainian President Volodymyr Zelenskiy said that Russian artillery attacks on Ukraine's second-largest city of Kharkiv amounted to state terrorism and called on the international community to recognise it as such.

"The terror aims to break us, to break our resistance," he said in a video address shared on social media describing Kyiv and Kharkiv as Russia's main targets.

Amid ever-growing international condemnation, Russia found itself increasingly isolated five days into its invasion, while also facing unexpectedly fierce resistance on the ground in Ukraine and economic havoc at home.

For the second day in a row, the Kremlin raised the specter of nuclear war, announcing that its nuclear-capable intercontinental ballistic missiles, submarines and long-range bombers had all been put on high alert, following President Vladimir Putin’s orders over the weekend.

An embattled Ukraine moved to solidify its ties to the West by applying to join the European Union, a largely symbolic move for now, but one that is unlikely to sit well with Putin, who has long accused the US of trying to pull Ukraine out of Moscow’s orbit.

On Sunday, the EU announced it would tighten sanctions on Russia, ban Russian state-owned television network Russia Today and news agency Sputnik and fund weapons for Ukraine to help it defend itself against Russia's invasion.