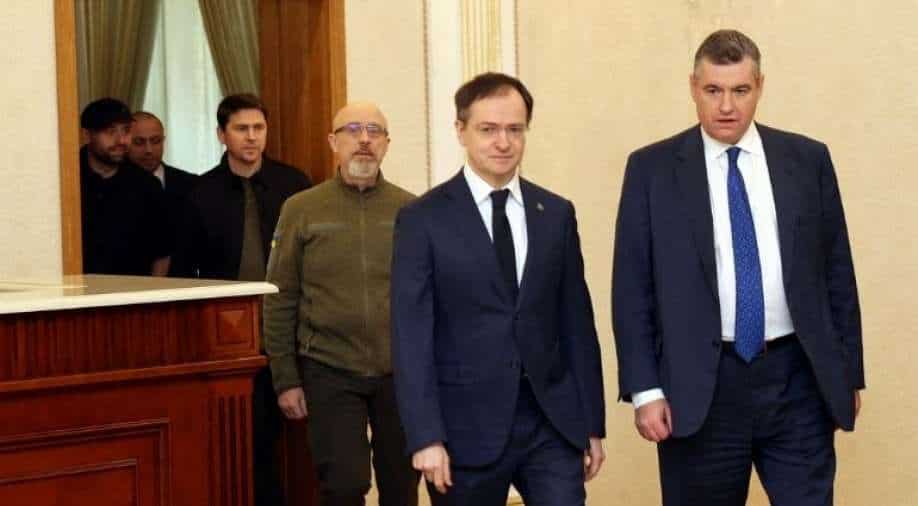 Officials from Russia and Ukraine ended peace talks on Monday and will return to their respective capitals for further consultations before a second round of negotiations, RIA news agency quoted Ukrainian presidential adviser Mykhailo Podolyak as saying.

"The delegations are returning to their capitals for consultations and have discussed the possibility of meeting for a second round of negotiations soon," Podolyak said.

The talks between the two sides were aimed at securing an immediate ceasefire and the withdrawal of Russian forces.

They were held on the border with strong Russian ally Belarus, where a referendum on Sunday approved a new constitution ditching the country's non-nuclear status at a time when the former Soviet republic has become a launch pad for Russian troops invading Ukraine.

Russian-Israeli billionaire Roman Abramovich, owner of Chelsea FC, was in Belarus assisting in Ukraine-Russia negotiations at the request of Kyiv

The talks came as Ukraine's forces fiercely resist the Russian offensive, a day after President Vladimir Putin ordered his defence chiefs to put the country's nuclear forces on high alert.

Russia calls its actions in Ukraine a "special operation" that it says is not designed to occupy territory but to destroy its southern neighbour's military capabilities and capture what it regards as dangerous nationalists.

Kyiv was initially reluctant to send a delegation to Belarus, given the country's role as facilitator in Russia's attack on Ukraine.

Russia’s Central Bank scrambled to shore up the tanking ruble Monday and the US and European countries upped weapons shipments to Ukraine.

Western nations ramped up the pressure with a freeze on Russia’s hard currency reserves, threatening to bring Russia’s economy to its knees.

While they hope to curb Putin’s aggression after he unleashed Europe’s biggest conflict since World War II, the measures also risked pushing an increasingly cornered Putin closer to the edge.

Neighboring Belarus could send troops to help Russia as soon as Monday, according to a senior American intelligence official with direct knowledge of current US intelligence assessments.

US officials say they believe the invasion has been more difficult, and slower, than the Kremlin envisioned, though that could change as Moscow adapts.

The British Defence Ministry said Monday that the bulk of Putin’s forces are about 30 kilometers (20 miles) north of Kyiv, their advance having been slowed by Ukrainian forces.

In addition to sanctions, the US and Germany announced they will send Stinger missiles to Ukraine among other military supplies.

The European Union, founded to ensure peace on the continent after World War II, is supplying lethal aid for the first time, including fighter jets.

The increasingly erratic Putin made a clear link between ever-tightening sanctions and his decision Sunday to raise Russia’s nuclear posture.

He also pointed at “aggressive statements” by NATO as a reason for his move, a reference to his long-running stance that the US-led alliance is an existential threat to Russia.