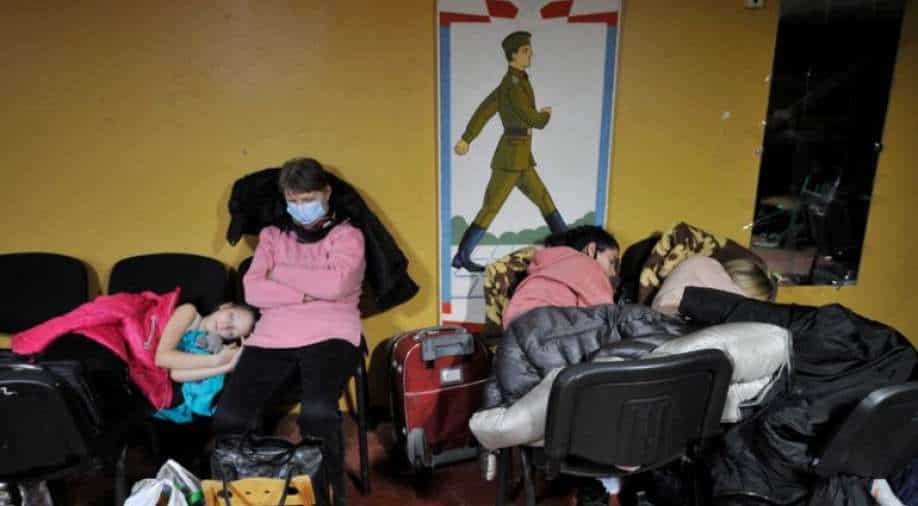 More than 10,000 Arab students attend university in Ukraine, drawn to the former Soviet republic by a low cost of living and, for many, the lure of relative safety compared with their own troubled homelands. Photograph:( AFP )

Hundreds of students from Lebanon, gripped by a financial crisis the World Bank says is one of the world's worst in modern times, are also trapped in the country

Thousands of young Arabs who took up studies in Ukraine, often fleeing violence back home, are appealing to be rescued from a new nightmare -- Russia's full scale invasion of the country.

More than 10,000 Arab students attend university in Ukraine, drawn to the former Soviet republic by a low cost of living and, for many, the lure of relative safety compared with their own troubled homelands.

Many have criticised their governments for failing to take concrete measures to repatriate them, and sought refuge in basements or the metro system. Few dared to cross the border into neighbouring Poland or Romania in search of sanctuary.

"We left Iraq to escape war... but it's the same thing in Ukraine (now)," Ali Mohammed, an Iraqi student told AFP by telephone from the western city of Chernivtsi.

Mohammed said he has been calling the Iraqi embassy in Kyiv around a dozen times a day since Russia launched the invasion but no one has picked up.

"We are demanding to go home. We are waiting to be rescued," he said. According to an Iraqi government official, there are 5,500 Iraqis in Ukraine, 450 of them students.

"I arrived in Odessa only six months ago, hoping to open a new page far away from war," he told AFP by telephone.

"I am lost. I don't know what to do," he said, adding he is spending most of his time hiding in a basement.

Among Arab countries, Morocco has the largest number of students in Ukraine, with around 8,000 enrolled in universities, followed by Egypt with more than 3,000.

"We demand solutions. The authorities must find us a solution," to get back home to Morocco, Majda tweeted when the invasion began on Thursday.

"What are you waiting for? This is World War III," she said, addressing authorities in her country, who announced measures the following day.

Hundreds of students from Lebanon, gripped by a financial crisis the World Bank says is one of the world's worst in modern times, are also trapped in the country.

"The (Beirut) authorities have not issued guidelines" for our evacuation, said Samir, 25.

"I left Lebanon because of the financial crisis, sold my car and took my small savings to study in Ukraine," he told AFP from Ukraine's second city of Kharkiv, near the Russian border.

Ali Chreim, a restaurant owner from Kyiv who heads the Lebanese expat community in Ukraine, said he has been helping a group of young Lebanese women, who have sought shelter in the capital's metro, by sending them food.

Before the invasion, 1,300 Lebanese students were studying in the country. Half managed to flee by their own means, but the rest are stuck, Chreim said.

Beirut set up a hotline but it only functions "intermittently", he added.

Planes will be sent to neighbouring Poland and Romania at a "date to be announced later", he said.

Other countries like Egypt have also pledged to organise repatriation flights from neighbouring countries.

But for Tunisia which does not have an embassy in Ukraine, getting in touch with its 1,700 citizens there is complicated.

Authorities said they had been in contact with international organisations such as the Red Cross to organise departures.

"We will begin the operation as soon as we have a full list of how many Tunisians wish to return home," foreign ministry official Mohammed Trabelsi told AFP.

"The supermarket shelves are empty, the streets have become dangerous. The embassy must help us get out of here," said two pharmacy students from Egypt stuck in the Black Sea port of Odessa.

Watch | Gravitas: The plight of Indian Students stuck in Ukraine

Other Egyptian students took matters into their own hands and crossed the border into Poland, hoping to make it back home.

Oil-rich Algeria, which has strong military links with Russia, did not ask its 1,000 nationals in Ukraine to leave.

Algerian authorities have, however, urged them to stay indoors and only venture out "in case of an emergency".