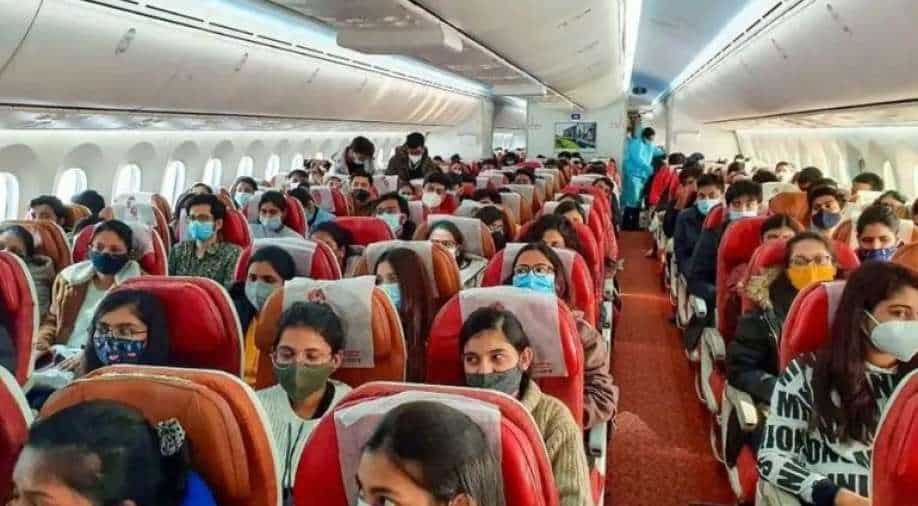 In this picture, India's ambassador to Romania Rahul Shrivastava can be seen addressing students that have been evacuated from Ukraine Photograph:( ANI )

Indian nationals, who reached the Ukraine-Romania border by road, have been taken to Bucharest by the Indian government officials so that they can be evacuated in an Air India flight

A message by Rahul Shrivastava, Indian Ambassador in Romania to the evacuated Indians from Ukraine has gone viral.

During a last-minute announcement before the evacuation flight took off from Bucharest, he said, "I know you have come through a very long and arduous road journey. So the last thing in your mind is an announcement by an ambassador. You are in the last leg of the journey back home where your friend and families will be waiting with an open arm... Remember your friends who are still here. And when you talk to your friends who are still waiting for the evacuation, you should tell them, assure them that the entire government of India team is working day and night to evacuate everyone. And our mission is not complete until we take the last Indian out of Ukraine."

#WATCH | "...Entire GoI is working day & night to evacuate everyone and our mission is not complete till we have evacuated the last person. Remember this day 26th Feb in your life...," Rahul Shrivastava, Indian Ambassador in Romania to the evacuated Indians from #Ukraine pic.twitter.com/Ro4pBGrB76

''The government of India is working day & night to evacuate everyone and our mission is not complete till we have evacuated the last person. Remember this day, 26th February, whenever you feel difficulty in life. Everything will be fine," the ambassador said.

Indian nationals, who reached the Ukraine-Romania border by road, have been taken to Bucharest by the Indian government officials so that they can be evacuated in the Air India flight, they noted.

Air India will operate more flights on Saturday to Bucharest and Hungarian capital Budapest to evacuate Indians stranded in Ukraine.

The Ukrainian airspace has been closed for civil aircraft operations since the morning of February 24 and therefore, the evacuation flights are operating out of Bucharest and Budapest.

Around 20,000 Indians, mainly students, are currently stranded in Ukraine, the officials said.

Before the closure of the Ukrainian airspace, Air India had operated a flight to Ukraine's capital Kyiv on February 22 that brought 240 people back to India.

Air India said on Twitter on Friday night that it will be operating flights on B787 aircraft from Delhi and Mumbai to Bucharest and Budapest on Saturday as special government charter flights to fly back stranded Indian citizens.

The Indian embassy in Ukraine on Friday said it is working to establish evacuation routes from Romania and Hungary.

"At present, teams are getting in place at the following check points: Chop-Zahony Hungarian border near Uzhhorod, Porubne-Siret Romanian border near Chernivtsi," it said.

Indian nationals, especially students, living closest to these border checkpoints are advised to depart in an organised manner in coordination with teams from the Ministry of External Affairs to actualise this option, the embassy said.

Once the above-mentioned routes are operational, the Indian nationals travelling on their own would be advised to proceed to the border checkpoints, it noted.

The embassy advised Indian travellers to carry their passports, cash (preferably in US dollars), other essential items and COVID-19 vaccination certificates to the border checkpoints.

"Print out Indian flag and paste prominently on vehicles and buses while travelling," it said.

The distance between Kyiv and the Romanian border checkpoint is approximately 600 kilometres and it takes anywhere between eight-and-a-half hours to 11 hours to cover it by road.

Bucharest is located approximately 500 kilometres from the Romanian border checkpoint and it takes anywhere between seven to nine hours by road.

The distance between Kyiv and the Hungarian border checkpoint is around 820 kilometres and it takes 12-13 hours to cover it by road.