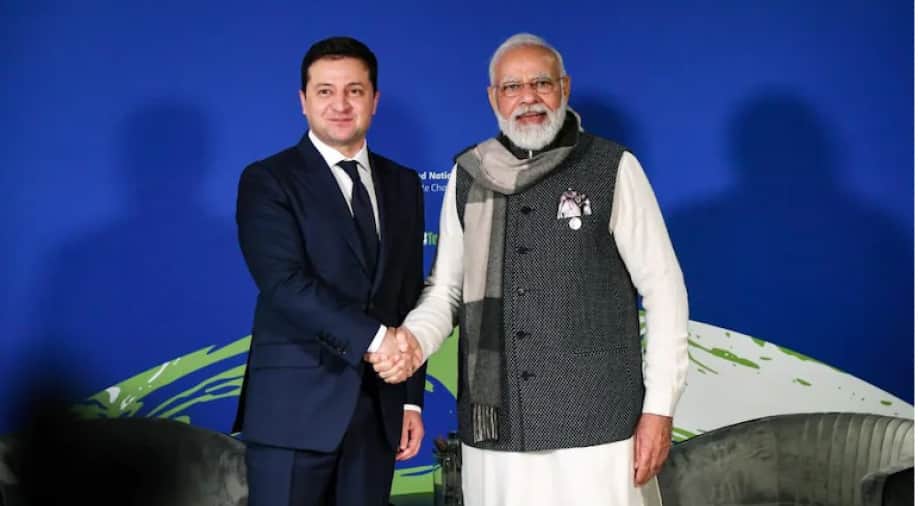 During the call, Prime Minister Modi expressed his deep anguish about the loss of life and property due to the ongoing conflict

Ukrainian President Volodymyr Zelensky spoke to Indian Prime Minister Narendra Modi on Saturday to apprise him of the ongoing Russian invasion and asked for India’s support in the United Nations Security Council against Kremlin.

Spoke with 🇮🇳 Prime Minister @narendramodi. Informed of the course of 🇺🇦 repulsing 🇷🇺 aggression. More than 100,000 invaders are on our land. They insidiously fire on residential buildings. Urged 🇮🇳 to give us political support in🇺🇳 Security Council. Stop the aggressor together!

According to a statement issued by the Prime Minister’s Office, PM Modi was briefed by President Zelensky about the ongoing conflict situation in Ukraine.

“Prime Minister (Modi) expressed his deep anguish about the loss of life and property due to the ongoing conflict.  He reiterated his call for an immediate cessation of violence and a return to dialogue, and expressed India’s willingness to contribute in any way towards peace efforts,” the statement said.

The prime minister also conveyed India’s deep concern for the safety and security of Indian citizens, including students, present in Ukraine.

He sought facilitation by Ukrainian authorities to expeditiously and safely evacuate Indian citizens.

This comes a day after Modi talked to Russian President Vladimir Putin and asked him to immediately cease violence against its former Soviet ally.

On Friday, India had abstained from the UN Security Council resolution on the Russian attack on Ukraine.

Though India abstained from voting, it called for respecting “sovereignty and territorial integrity of states and sought immediate cessation of “violence and hostilities", in comments that the sources said reflected a “sharper tone” and criticism of the Russian offensive, reported PTI news agency.

India retained the option of reaching out to all relevant parties to find a middle ground and foster dialogue and diplomacy to defuse the crisis.

At the crucial UN Security Council session, Russia used its veto power to block the US-sponsored resolution deploring in the “strongest terms" Russian "aggression" against Ukraine.

Apart from India, China and the United Arab Emirates too abstained from voting.