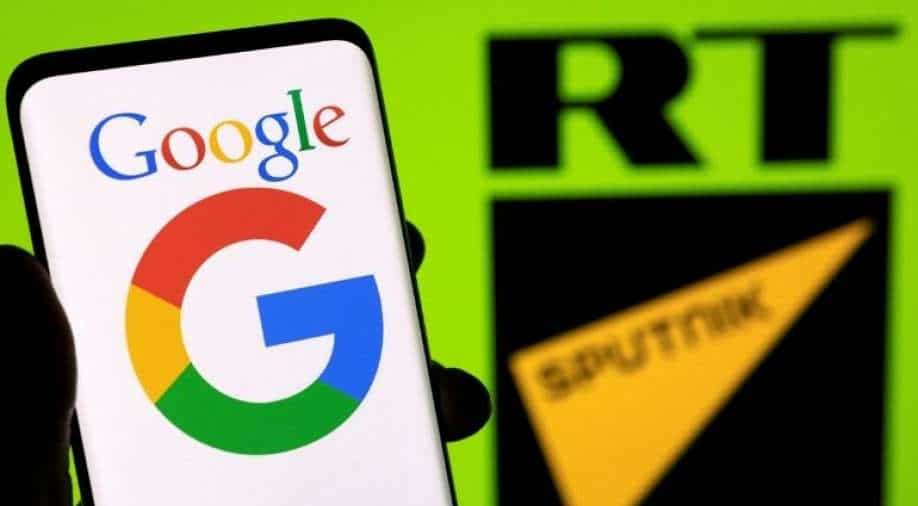 Google app is seen on a smartphone in front of RT and Sputnik logo in this illustration Photograph:( Reuters )

Russia's media regulator, Roskomnadzor said adverts on the platform were calling for the communications systems of Russia and Belarus' railway networks to be suspended and that their dissemination was evidence of the US tech giant's anti-Russian position

In the first step towards a possible access ban, Russian regulators on Friday accused US tech giant Google and its video subsidiary YouTube of "terrorist" activities.

Earlier this month, the country launched a criminal case against Meta, which owns Facebook and Instagram, accusing the company of allowing posts "calling for the murder" of Russians.

Russia's media regulator, Roskomnadzor said adverts on the platform were calling for the communications systems of Russia and Belarus' railway networks to be suspended and that their dissemination was evidence of the US tech giant's anti-Russian position.

"The YouTube administration's activities are terrorist in nature and threaten the life and health of Russian citizens," Roskomnadzor said, quoted by Interfax news agency.

It was the latest salvo in a row between Moscow and foreign tech firms over Ukraine.

YouTube, which has blocked Russian state-funded media globally, is under heavy pressure from Russia's communications regulator and politicians.

Russian tech entrepreneurs have said they would launch picture-sharing application Rossgram on the domestic market to help fill the void left by Instagram.

Russia is one of the most restrictive countries for press freedom and freedom of expression, but the situation has worsened in the past few weeks since the operation in Ukraine began on February 24.

Former Russian President Dmitry Medvedev on Friday wrote a fierce criticism of foreign social media firms, namechecking both Meta and YouTube, but he hinted that the door leading to their possible return to the Russian market would be left ajar.

"The 'guardians' of free speech have in all seriousness allowed users of their social media to wish death upon the Russian military," Medvedev, who served as president from 2008 to 2012 and is now deputy secretary of Russia's Security Council, wrote on his Telegram channel.

Medvedev said Russia has the necessary tools and experience to develop its own social media, saying the "one-way game" of Western firms controlling information flows could not continue.

"In order to return, they will have to prove their independence and good attitude to Russia and its citizens," he wrote.

"However, it is not a fact that they will be able to dip their toes in the same water twice."