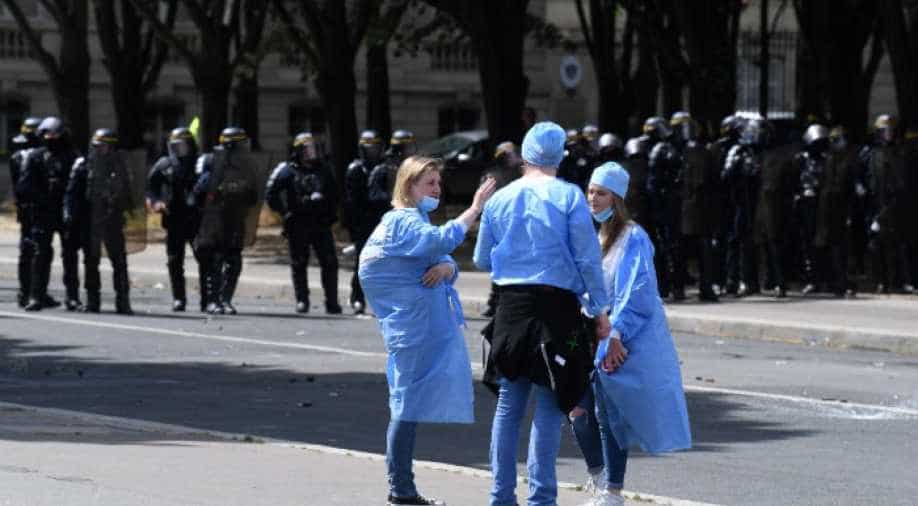 Low wages, poor and inadequate resources, understaffing, poor infrastructure, hollow promises and so on - the list goes on for French health care workers. The conditions have been made worse due to the coronavirus pandemic.

According to the police, fringe groups had hijacked the protest and anarchist protesters known as "black bloc" were attacking the officers because of which the agitation turned violent.

The police headquarters in Paris tweeted, "Violent groups are trying to escalate tensions at the peaceful demonstration held by healthcare workers."

Police have arrested at least 16 protests so far.

The health care workers' movement began last year, but had to be put on hold due to the coronavirus outbreak. The workers say the coronavirus crisis has further exposed the cracks within the healthcare system.

They expressed their frustration with signs that read, "Applause during the COVID, what now?!" and "You count your euros, we count our dead."

A 25-year-old nurse, Agathe Schlesser, said, "For a nurse that comes from the province (outside Paris), we're looking for stability in Paris, while it's currently impossible. we're seeing a gap in posts that are not renewed, people leave and we realise that in our healthcare service, we're lacking 18 nurses.''

The French government has promised a reform of the healthcare system, with massive investment and greater appreciation, but labour unions in support of health workers say the government response is insufficient.

"We expect salary increases and the recognition of qualifications. We want more beds, the hiring of more personnel, the re-opening of closed hospitals, and of course, for them not to think that the money we're putting into hospitals is a debt. on the contrary, it's an investment, and so we should stop talking about debt when it comes to public hospitals," said the leader of CGT Labour Union, Philippe Martinez.