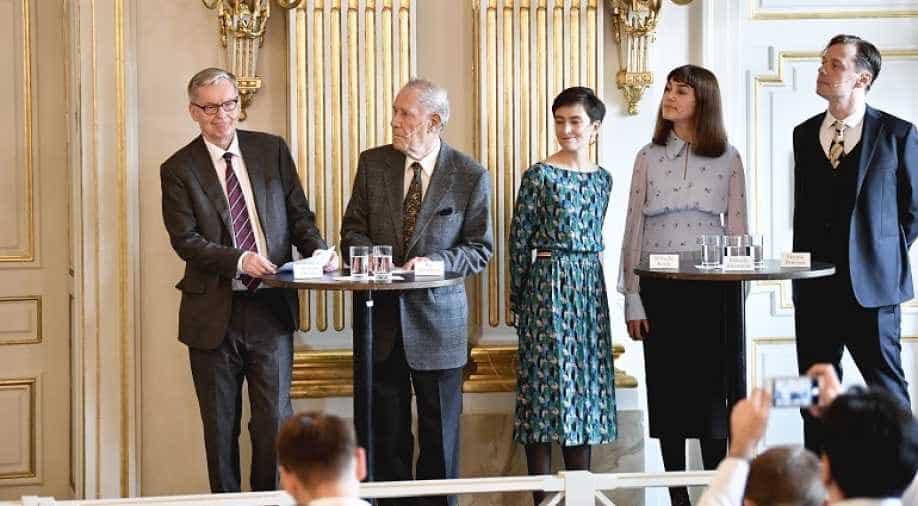 Members of the Nobel Committee for Literature (L-R) Chairman Anders Olsson, Per Wastberg, Rebecka Karde, Mikaela Blomqvist and Henrik Petersen announce the winners of the 2018 and 2019 Nobel Prize in Literature at the Swedish Academy in Stockholm, Sweden on October 10, 2019. Photograph:( AFP )

Tokarczuk who won the 2018 Man Booker International prize for her novel Flights – “for a narrative imagination that with encyclopedic passion represents the crossing of boundaries as a form of life.”

Polish writer Olga Tokarczuk on Thursday won the 2018 Nobel Prize in Literature, which was delayed over a sexual harassment scandal, while Austrian novelist and playwright Peter Handke took the 2019 award, the Swedish Academy said.

Tokarczuk, considered the most talented Polish novelist of her generation, was honoured "for a narrative imagination that with encyclopaedic passion represents the crossing of boundaries as a form of life".

Her books portray a polychromatic world perpetually in motion, with characters' traits intermingled and language that is both precise and poetic.

Handke meanwhile won "for an influential work that with linguistic ingenuity has explored the periphery and the specificity of human experience," the Academy said.

Handke "has established himself as one of the most influential writers in Europe after the Second World War."

His works are filled with a strong desire to discover and to make his discoveries come to life by finding new literary expressions for them, the Academy said.

Tokarczuk becomes just the 15th woman to have won the prestigious distinction, out of 116 literature laureates honoured since 1901.