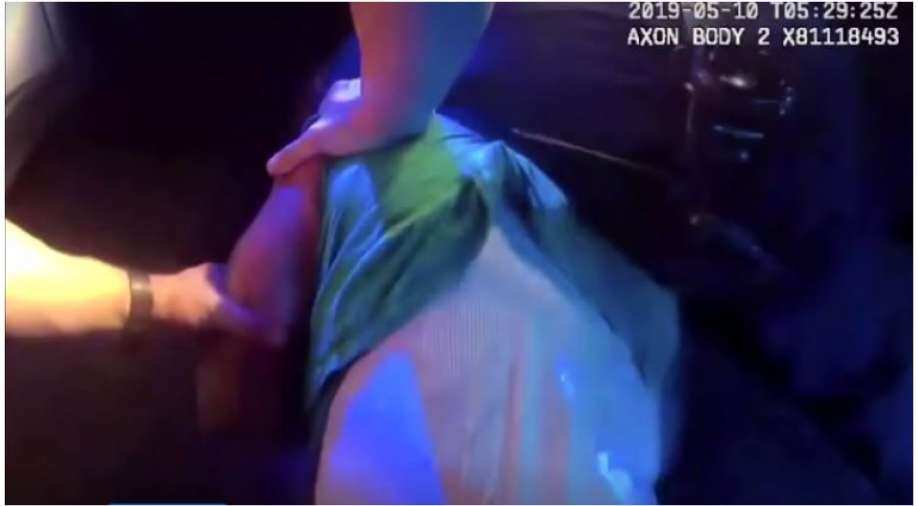 In this screengrab taken from the body-cam footage, Robert Greene (49) a black man (in green clothes) can be seen being held in a chokehold by Louisiana police officers Photograph:( Reuters )

A body-cam video released by Louisiana authorities showed a Black man being tased, dragged, choked and beaten. The man later died and the authorities initially said the cause of death was a car crash during a police chace.

The incident took place on May 10, 2019 when police in northern Louisiana tried to stop a car driven by Ronald Greene, a 49-year-old barber, for what they said was an unspecified traffic violation.

Greene's relatives have been reported to have said that police initially told them that he died on impact when, during a chase, his car crashed into a tree.

But a written police report later said Greene survived the crash and struggled with troopers trying to arrest him. It said he died en route to a hospital.

Only later did Louisiana state police acknowledge that they had used force during the arrest, which they said was justified.

But the body-camera (body-cam) footage acquired by Associated Press and released by authorities late on May 22 shows a horrific scuffle.

The newly-released bodycam footage shows a high-speed chase and Louisiana state troopers punching Greene when he was already in handcuffs.

He was also dragged across the ground by shackled feet, and stunned with tasers as he cried, "I'm scared."

Greene, of West Monroe, Louisiana, led police on a high-speed chase after midnight of May 10, 2019, and crashed his car before being taken into custody, police said. He died in an ambulance on the way to a hospital.

An autopsy showed that Greene had alcohol and cocaine in his system, suffered multiple injuries from the crash, as well as injuries from a physical struggle. The manner of death was not listed.

Earlier this week, the case quickly became another national touchstone of alleged police abuse after the unauthorised release of police video by the Associated Press.

In response to that release, Colonel Lamar Davis, the superintendent of the Louisiana State Police held a late night press conference and said the department is releasing all the police bodycam video to add context to what has already been public.

Of the troopers involved, DaKota DeMoss was notified that the department intends to fire him and remains on leave pending another excessive use of force case, police said.

Master Trooper Chris Hollingsworth was also notified of the department's intent to dismiss him, but died hours later in a fatal car crash in 2020, police said.

Another trooper, Kory York, served a 50-hour suspension and is back on active duty.

The case is also the subject of a federal civil rights investigation.