Police fire 20 times at California man fearing he's carrying a weapon. He was holding an iPhone 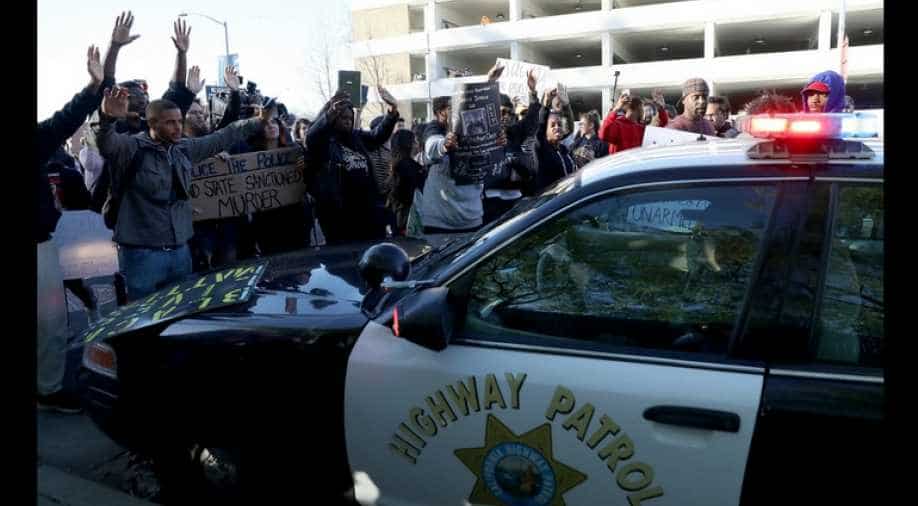 Black Lives Matter protesters surround a California Highway Patrol car as it attempts to drive down a street during a demonstration. Photograph:( AFP )

Police in Sacramento, California shot dead an African American father of two in the backyard of his grandparents' home fearing that he was carrying a weapon. He was actually holding an iPhone.

Body camera and surveillance helicopter footage released late Wednesday shows how police chased and then fired 20 rounds at Stephon Clark, killing him on the spot.

Following an uproar in the case, the Sacramento Police Department said it "recognizes the significance of this incident and the impact it has on our community," and that it was "committed to providing timely information and communicating openly with our community."

The incident was triggered by an emergency 911 phone call late Sunday stating that a man was smashing car windows in the neighborhood.

Clark, 22, appeared to fit the suspect's profile, and police chased after him, backed by a helicopter equipped with infrared cameras.

The videos caught by the helicopter and by the officer's body cameras showed Clark running through the neighborhood, then entering the backyard of his grandparents' home, where he lived.

The officers then burst into the backyard with their weapons drawn and confront Clark, shouting out: "Show me your hands!" followed soon after by "Gun, gun, gun!"

The officers opened fire, with each shot appearing as a flash on the helicopter's infrared footage.

"At the time of the shooting, the officers believed the suspect was pointing a firearm at them," Sacramento police said in a statement.

"After an exhaustive search, scene investigators did not locate any firearms. The only items found near the suspect was a cellphone."

Hearing the gunshots, Clark's grandparents called 911, without realizing that police were shooting.

"They finally told me, hours later, that there was a victim dead in my backyard," Sequita Thompson told FOX40 television.

Thompson ignored police orders to refrain from looking out the window -- and was horrified that the man who was shot dead was her grandson.

"He was right there, dead," she said. "And I told the officers, 'You guys are murderers, murderers.'"

Thompson later told The Sacramento Bee newspaper: "He was at the wrong place at the wrong time in his own backyard?

The officers involved in the shooting were put on leave pending an investigation.

The latest shooting has revived a recurring debate over police abuses against African Americans, who account for an overwhelming share of the number of suspects killed by law enforcement each year.