Police and African-American community unite in Dallas after shooting 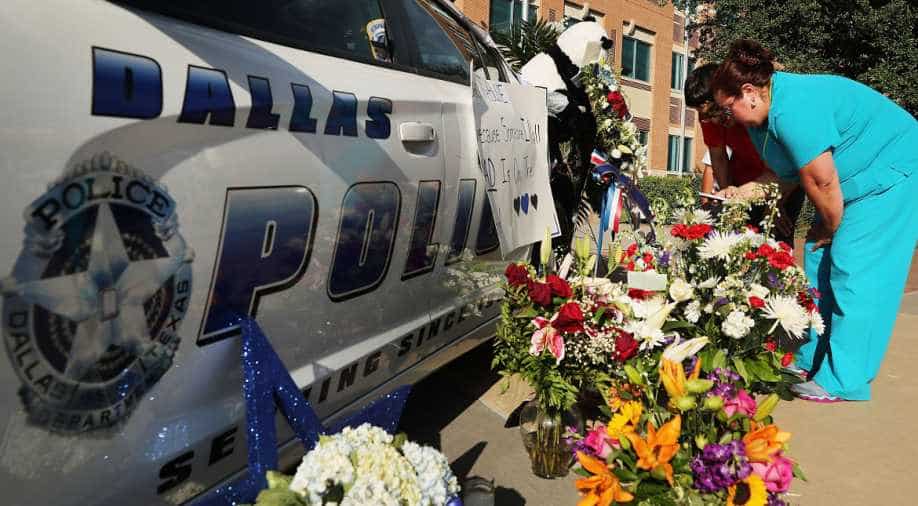 The small congregation of mostly African-Americans expressed their support for the police and their service to the community, while insisting that changes be made to the way communities of colour are policed. Photograph:( Getty )

Follow Us
Dallas churchgoers prayed and reflected on the dark and deadly events of the past few days during services on Sunday.

On Thursday five Dallas police officers were killed in a sniper ambush attack. Seven other police officers and two civilians were wounded in the shooting at the end of a protest over the recent police killings of Alton Sterling in Baton Rouge, Louisiana and Philando Castile a suburb of St Paul, Minnesota. The Dallas shooter was a US Army reservist who served in Afghanistan.

During Sunday service at Joy Tabernacle AME church in Dallas, the small congregation of mostly African-Americans expressed their support for the police and their service to the community, while insisting that changes be made to the way communities of colour are policed.

"Time and time again, particularly this past week with Alton Sterling and Philando Castile, we see that there are times when those interactions have proven deadly and they've not had to," said Rev Dr Michael W Waters, founder and senior pastor of Joy Tabernacle AME Church.

Dr. Waters said he and several of his congregants were among the protesters in downtown Dallas on Thursday and he led a prayer before the shooting began.

Two law enforcement officers joined the congregation and discussed how to overcome the misunderstandings between the police and the black community.

Law enforcement officer Chelsea Whitaker said she was one of the responding officers during Thursday's shooting and helped search rooftops for the shooter. Despite anger with the police, she urged compliance with law enforcement.

"I've also had to talk to our brothers to try to get them to understand what compliance means. I also have to explain to them that you don't get an explanation for why I'm here before you comply. I teach classes to help our young people understand what they are supposed to do when they are pulled over in traffic. I understand it. I get. And both sides are very important and you can't speak about the one without talking about the other."

"Seeing everybody just coming up, lining up to give us hugs, to bring food, to bring water, to just say that they are with us and that they are fighting the fight with us, even though...Some of them say, 'I don`t even like police, but I want to be here to say I'm sorry for what happened. That's not the way it needs to be done.' And we need to find a way to fight together to solve the issue," she said.

Dr. Waters added, "My hope is that we will work together and we would take the opportunity afforded by this great tragedy to build together a better Dallas. I'm committed to doing my part to work towards that end and I believe many are also committed towards the same."

Also on Sunday, US President Barack Obama said there was legitimate criticism to be made of the criminal justice system and that citizens should continue to protest against it.