Our requirement conforms to international law: China on closure of US consulate in Chengdu 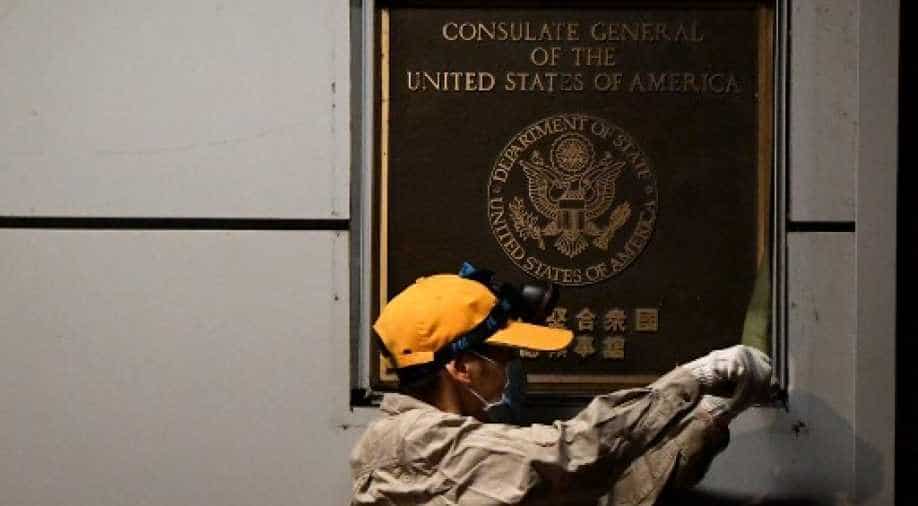 Wall insignia of US Consulate in Chengdu being taken out Photograph:( AFP )

The United States had accused the Chinese staff in Houston of espionage, as the Chinese hit back making a similar allegation on the US staff at Chengdu

After the United States pulled out of its consulate in Chengdu, the Chinese foreign embassy said that its move was "justified and necessary response to the unjustifiable behaviour of the US."

China on Monday took control of the US consulate building after ordering the US staff to vacate in retaliation for China's ouster from the Houston consulate in Texas as tensions rose to a new level between the two powerful economies. The United States had accused the Chinese staff in Houston of espionage, as the Chinese hit back making a similar allegation on the US staff at Chengdu citing national security issues.

The US lowered its flag at 6:18 am on Monday as police barracked the area and stepped up security.

In a video message, the US embassy said: "The US consulate in Chengdu has been proudly promoting the mutual understanding between Americans and the people in Sichuan, Chongqing, Guizhou, Yunnan and Tibet since 1985. We will forever miss you."

Wenbin asserted that the US had taken "unilateral" and "provocative actions" by suddenly asking the Chinese side to close the consulate in Houston.

However, the Chinese foreign ministry said that it did not wish to see the "current situation of relations between China and the US" while adding that the "US bears the entire responsibility".

Wenbin urged the United States to "immediately correct its mistakes and create necessary conditions for the bilateral relations".