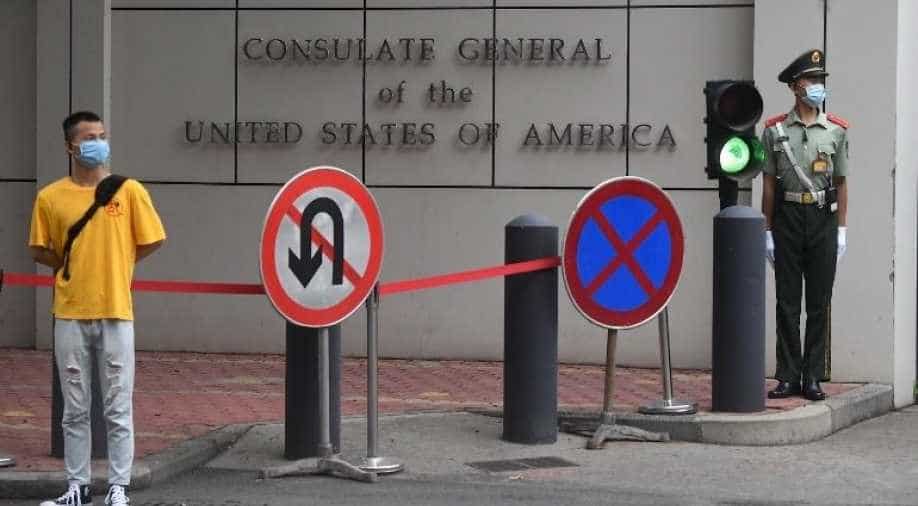 US consulate in Chengdu Photograph:( AFP )

On Thursday, the Chinese foreign ministry decided to shut down the US consulate and said that "the United States launched a unilateral provocation by abruptly demanding that China close its consulate in Houston".

Chinese authorities have taken the possession of closed US consulate on Chengdu on Monday, as per foreign ministry's statement. The consulate was ordered to shut last week in a tit-for-tat move after the US ordered closing the Houston consulate.

"At 10am on July 27th, according to the Chinese side's request, the US consulate in Chengdu was closed. Afterwards, Chinese authorities entered through the front entrance and took it over," the Chinese ministry's public diplomacy office said in a statement on its official social media account.

On Thursday, the Chinese foreign ministry decided to shut down the US consulate and said that "the United States launched a unilateral provocation by abruptly demanding that China close its consulate in Houston".

China's foreign ministry said the measure taken by it was the "legitimate and necessary response to the unjustified act by the US".

The Chinese foreign ministry said that it "conforms with international law, the basic norms of international relations, and customary diplomatic practices."

"The current situation in China-US relations is not what China desires," it said, adding the US is responsible for it.

The Chinese spokesman said that some "people of the US consulate in Chengdu have engaged in activities that are incompatible with their status, interfering in China's internal affairs" while asserting that "China has repeatedly lodged representations, and the US side is well aware of it."

"The Chinese side has made specific requirements on the ceasing of all operations and activities by the US Consulate General in Chengdu, in accordance with the principle of reciprocity in diplomacy," Wang Wenbin said.

The US had ordered the closure of the Chinese consulate in Houston after what it called to "protect American intellectual property and Americans' private information" amid reports of papers being burned inside the Chinese consulate compound, as the fire reportedly started US firefighter arrived on the scene but were prevented from entering the building.

The Chinese officials were ordered to vacate the consulate within 72 hours.