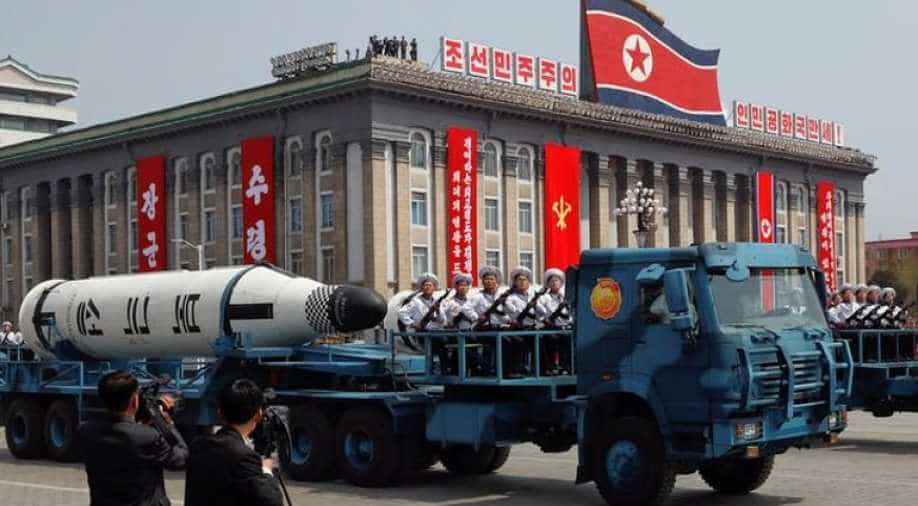 The new launch might have been to try and test South Korea's new liberal president, Moon Jae-In, and the US. Both have signalled an interest in negotiations to ease months of tensions. Photograph:( Reuters )

North Korea has test-fired another missile ||The missile flew 700 kms before crashing into the Sea of Japan ||The new launch might have been to try and test the South's new liberal president Moon Jae-In and the US, both of which have signalled an interest in negotiations to ease months of tensions

North Korea fired a ballistic missile Sunday in an apparent bid to test the South's new liberal president and the US which have both signalled an interest in negotiations to ease months of tensions.

The missile flew more than 700 kilometres (435 miles) before landing in the Sea of Japan, South Korea's Joint Chiefs of Staff said. The US Pacific Command said it did not appear to be an intercontinental ballistic missile.

New South Korean President Moon Jae-In, who was inaugurated on Wednesday, slammed the test as a "reckless provocation" after holding an emergency meeting with national security advisors.

He said the government strongly condemned this "grave challenge to the peace and security of the Korean peninsula and the international community," his spokesman Yoon Young-Chan said.

Moon, unlike his conservative predecessors, advocates reconciliation with Pyongyang but warned Sunday that dialogue would be possible "only if the North changes its behaviour".

Moon had said in his inauguration speech that he was willing to visit Pyongyang "in the right circumstances" to defuse tensions on the peninsula, with Pyongyang and Washington exchanging hostile rhetoric.

"The North is apparently trying to test Moon and see how his North Korea policy as well as policy coordination between the South and the US will take shape," said Yang Moo-Jin, professor at the University of North Korea Studies in Seoul.

'Seeking leverage'
The launch was also aimed at "maximising the North's political leverage" ahead of possible negotiations with the US, as Pyongyang and Washington both recently signalled they were open to talks, he added.

"The North wants to show before negotiations that their precious, powerful weapon is not something they would give up so easily," Yang said.

US President Donald Trump has threatened military action against the North but recently appears to have softened his stance, saying he would be "honoured" to meet the North's leader Kim Jong-Un under the right conditions.

Choe Son-Hui, a senior official at the North's foreign ministry handling its US policy, also said Saturday the North would be willing to hold talks with the US if the conditions are right.

Washington has been looking to China for help in reining in Kim and the missile test is likely to embarrass Beijing, which is hosting a summit Sunday to promote its ambitious global trade infrastructure project.

China, the isolated North's sole major ally and economic lifeline, has been reluctant to exert pressure to upset the status quo in Pyongyang and risk an influx of refugees from its neighbour.

'Fast progress'
The latest test was also the North's first launch since a controversial US missile defence system deployed in the South became operational on May 2 and follows a failed April 29 ballistic missile test.

"We strongly protest against North Korea," he said.

The North has staged two atomic tests and dozens of missile launches since the start of last year in its quest to develop a missile capable of delivering a nuclear warhead to the US mainland.

Most experts have doubted that the North has developed an intercontinental ballistic missile (ICBM) with that range.

But many say the isolated nation has made a great progress in its nuclear and missile capabilities since Kim took power after the death of his father and longtime ruler, Kim Jong-Il, in 2011.

The missile was fired from a site near the northwestern city of Kusong. A previous test at the same site in February sent a missile 500 kilometres, far less than Sunday's launch.