'Nobody wants a lockdown': Coronavirus related deaths spike in Russia 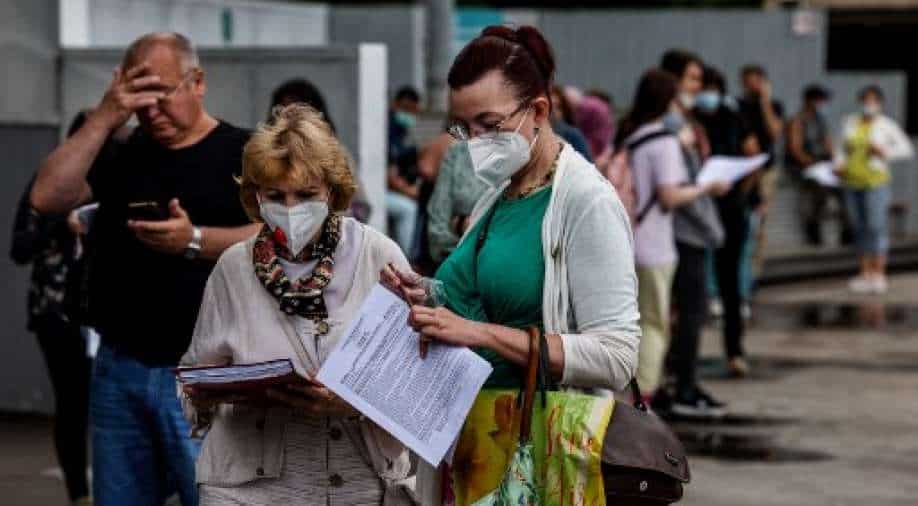 People wait in line to get a coronavirus, Covid-19, vaccine at a vaccination center in Sokolniki Park in Moscow Photograph:( AFP )

Moscow Mayor Sobyanin has imposed strict virus rules as he ordered majority of Moscowvites to stay home and those in the service industry to vaccinate themselves.

Russia on Friday reported the highest number of coronavirus related deaths in the last 24 hours for the fourth successive day as the country continues to grapple with the virus.

Amid the spike in numbers, Kremlin spokesman Dmitry Peskov said the lockdown wasn't discussed while emphasising the importance of vaccination.

"Nobody wants any lockdowns, and yes, it is not up for debate," Kremlin spokesman Dmitry Peskov said.

Saint Petersburg which has been hosting European Championship matches including Spain vs Switzerland quarter-final later on Friday reported 101 fatalities even as Moscow grapples with the Delta variant which the city Mayor said was responsible for over 90 per cent of COVID-19 cases.

Moscow Mayor Sobyanin has imposed strict virus rules as he ordered majority of Moscowvites to stay home and those in the service industry to vaccinate themselves.

The country reported over 23,000 new COVID-19 infections with Moscow registering over 6,890 cases. Reports say hospitalisations in the Russian capital has skyrocketed amid explosive growth in virus cases.

Russia has been slow to vaccinate its citizens with just  2.6 million people inoculated with the first dose out of a population of 146 million.

Saint Petersburg has witnessed 100 deaths per day this week amid the European Championship matches even as authorities ordered 50 per cent capacity limit on stadiums and restaurants to close between 2am and 6pm with restrictions on the number of people attending public events.

The World Health Organization(WHO) had earlier warned about the crowds should be monitored during the Euro 2020 matches as they enter and leave the stadium even as UEFA said it was following the COVID-19 guidelines.

The Russian capital had offered one-dose of Sputnik Light jab to millions of migrants even as it continued to inoculate citizens with the Sputnik V vaccine. The Sputnik V was registered in August last year, the country has not approved any foreign vaccines.

Putin while acknowledgin he had taken the Sputnik V vaccine had said on Wednesday: "Thank God, we don't have such tragic situations after vaccinations like AstraZeneca or Pfizer."