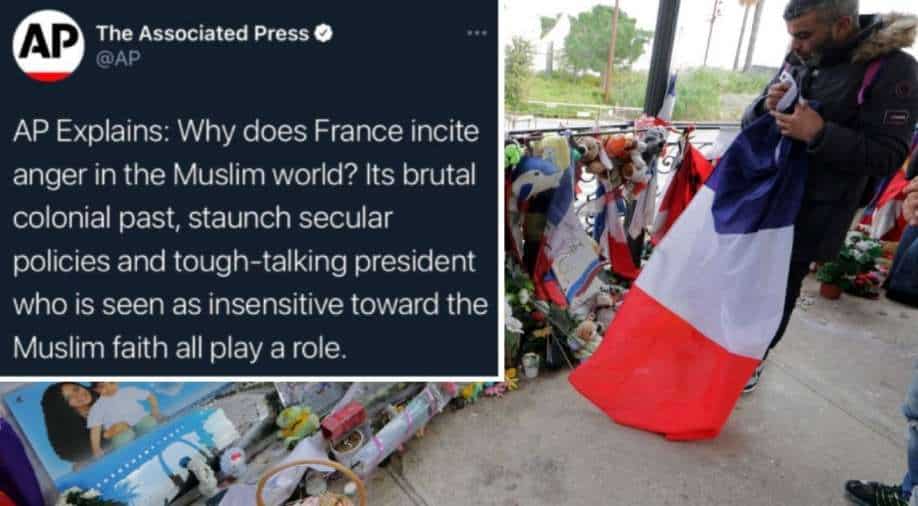 The news agency had posted an explainer on ''Why does France incite anger in the Muslim world? Its brutal colonial past, staunch secular policies, and a tough-talking president who is seen as insensitive toward the Muslim faith all play a role''

The US media outlet faced backlash and was accused of endangering the lives of French people.

French journalist Agnes Poirier said “This is not only disgraceful but dangerous. The Associated Press is inciting hatred against France and its people.''

Let me correct that headline for you; “Why do religious nutters think it’s ok to behead people because they got upset at some cartoons? “

AP, later on, posted a watered-down version of the explainer and issued an explanation for its use of the word ‘incites.’

Many countries champion freedom of expression and allow publications that lampoon Islam’s prophet. Why has the reaction against France been especially virulent? Its colonial past, staunch secular policies and tough-talking president all play a role. https://t.co/UNf9EzW7ux

However, the replacement posts did little to assuage anger on social media, as Twitter users continued to post their objections to the AP’s handling of the issue.

Full-on blitz of victim blaming towards France in the US media these days.

And yet, I’m old enough to remember on the day after 9/11, Le Monde writing “We Are All Americans.” https://t.co/IaBuy0XueO

The Nice attack, on the day Muslims celebrated the Prophet Mohammad's birthday, came amid growing Muslim anger across the world over France's defence of the right to publish cartoons depicting the Prophet.

On Oct. 16, Samuel Paty, a school teacher in a Paris suburb, was beheaded by an 18-year-old Chechen who was apparently incensed by the teacher showing a cartoon of the Prophet Mohammad in class during a civics lesson.

Protesters have denounced France in street rallies in several Muslim-majority countries, and some have called for boycotts of French goods.