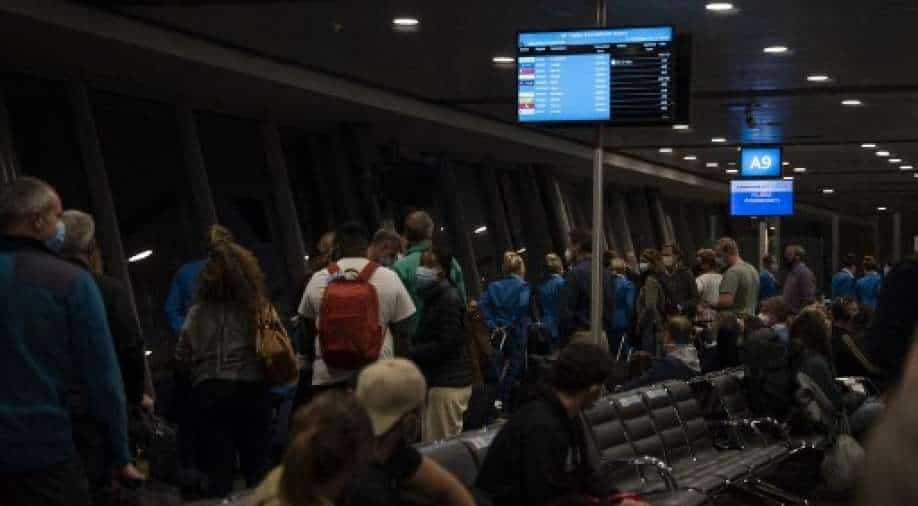 Passengers get ready to board a flight to Amsterdam in Johannesburg  Photograph:( AFP )

Dutch authorities said the couple were trying to board a plane to Spain however they were caught by military police at the airport.

Dutch authorities detected another Omicron variant case in a passenger after 61 people were detected with the virus in two flights which had returned from South Africa and landed at Amsterdam airport on Friday.

Reports claimed a couple were put under "forced isolation" in a hospital after they tried to escape from the hotel where other travellers were put in isolation.

Dutch authorities said the couple were trying to board a plane to Spain however they were caught by military police at the airport. The couple however said they were cleared by authorities.

The health authorities had tested over 600 passengers aboard the two flights which had landed at Schiphol airport from Johannesburg and Cape Town on Friday. Those who tested positive were put in a hotel near the airport.

Reports claim Dutch officials are seeking to test thousands of other passengers who have recently travelled from southern African countries.

South Africa had announced last week it had detected a new variant which the World Health Organisation named Omicron and classified it as a "variant of concern".

Britain which had imposed the travel ban within hours called G-7 foreign ministers meet on Monday to devise a response against the new variant as European Commission chief Ursula von der Leyen said it was a "race against time".