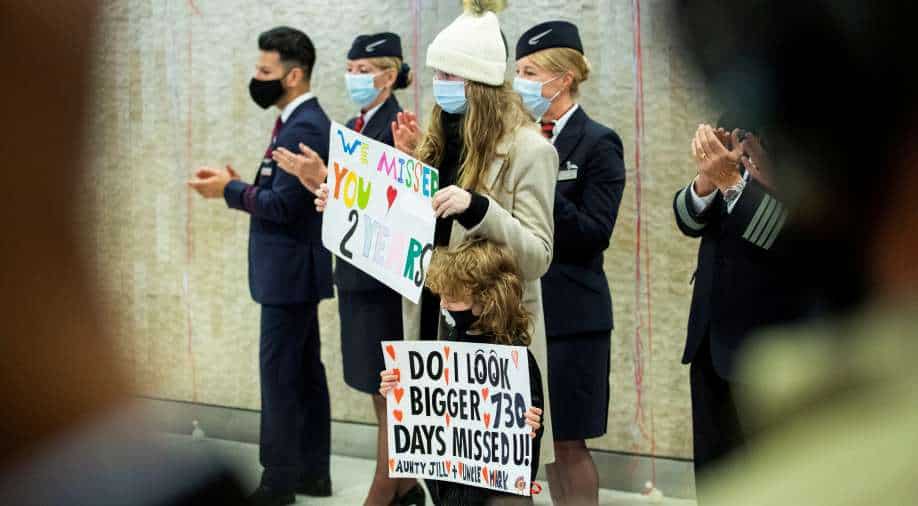 People wait for their relatives at JFK airport in New York Photograph:( Reuters )

PM Boris Johnson had announced stricter rules for international travellers as people arriving in the country were directed to take a PCR test and self-isolate until a negative test result is issued.

Reports say at least six Omicron variant cases have been detected in Scotland taking the total number of new virus variant cases in the UK to nine.

We're taking action to prevent the spread of the #OmicronVariant of #COVID19.

From 4am on Tuesday:

➡️ face coverings will be compulsory in shops & on public transport

Ministers from Scotland and Wales have reportedly written to PM Boris Johnson to impose tougher travel restrictions amid a rise in variant cases in the country.

PM Boris Johnson had announced stricter rules for international travellers as people arriving in the country were directed to take a PCR test and self-isolate until a negative test result is issued. Also, all those who have come in contact with suspected Omicron cases are to self-isolate for at least ten days.

Watch: What do we know about the Omicron variant?

Johnson warned that "storm clouds" were gathering across Europe as the continent battles the virus as he urged citizens not to be complacent and take the booster shots. School kids have also been asked to wear masks in crowded areas.

Also Read: Vaccines save lives but does not fully prevent virus transmission, says WHO chief

Britain is one of the worst-hit countries due to the virus with over 143,000 COVID-19 fatalities and over 10 million cases. The country has been witnessing a surge in virus cases in the past month.

The Boris Johnson government has called a meeting of G7 health ministers on Monday to discuss the response to the new virus variant.

Meanwhile, the Australian government declared it won't reopen its borders on December 1 as two more Omicron variant cases were detected taking the number of variant cases in the country to five. The move is set to hit students and skilled workers who were set to enter the country after over 20 months.

Also Read: Will the vaccines stop Omicron? Scientists are racing to find out.

Morocco became the latest country to halt incoming passenger flights for two weeks to protect citizens after South Africa last week revealed it had detected the Omicron variant which had shown several mutations.