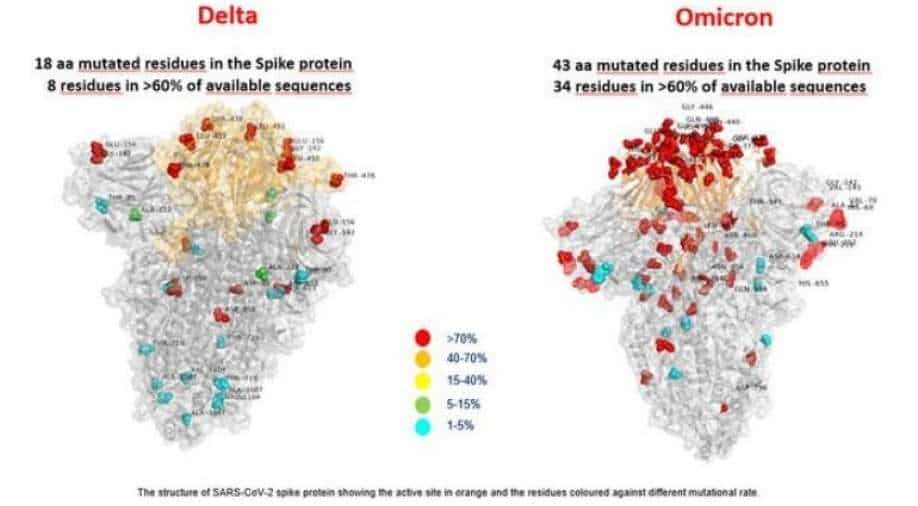 Scientists have found about 50 mutations in omicron, 30 of which are on the S protein, and half of those in the receptor-binding domain – the part that binds to the ACE2 receptor on human cells through which the virus enters tissues. Photograph:( Twitter )

The first picture of Covid variant Omicron reveals how many mutations it has in comparison to Delta — and why doctors are concerned.

The new Covid variant, Omicron, has been imaged for the first time, revealing that it contains many more mutations than the Delta variant.

The famed Bambino Gesu hospital in Rome created and released the three-dimensional picture.

According to Claudia Alteri, professor of clinical microbiology at Milan State University and a researcher at Bambino Gesu, the study team concentrated on looking for changes in "the three-dimensional structure of the spike protein."

In the three-dimensional "image", which looks like a map, "we can clearly see that the Omicron variant presents many more mutations than the Delta variant, concentrated above all in one area of the protein that interacts with human cells,", the team of researchers said in a statement Sunday.

Yes, that’s the expectation but more data is needed before we know. Here is a model from @bambinogesu of the spike (S) protein targeted by vaccines & antibody drugs. The red blobs show mutations in #Delta & #Omicron. Each blob is an opportunity to evade a spike-binding antibody. pic.twitter.com/WkClrGLR1x

"This does not automatically mean that these variations are more dangerous, just that the virus has further adapted to the human species by generating another variant," the researchers said.

"Other studies will tell us if this adaptation is neutral, less dangerous, or more dangerous," they added.

While there may be additional subtle alterations, the larger ones tend to affect factors like the virus's transmissibility.

The newest form included more than 50 mutations, which Prof Bennett described as "strange" when compared to the handful of large changes seen in prior variations.

Because the spike area is where the virus binds to human cells and where vaccinations are focused, mutations in this region are particularly important.

Even if a person has been vaccinated or has had Covid previously, if the variety is sufficiently different from past forms of the virus, our immune system may fail to recognise it or remember how to fight it.

According to the World Health Organization, there were at least 10 mutations in this variation associated to the receptor-binding domain on the protein spike.

Compared to two for Delta and three for Beta, this is a significant difference.