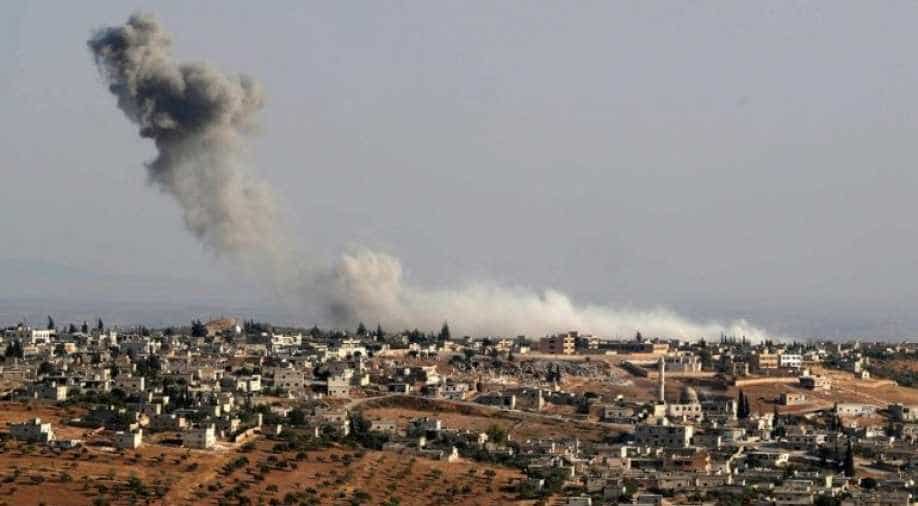 A major escalation begins in late April after clashes and strikes since February had already killed more than 200 civilians, according to the UN.

The Syrian regime and its ally Russia have for nearly four months ramped up bombardment of the last major jihadist-run bastion in the country after eight years of brutal conflict.

On Sunday, following fierce battles with jihadists and rebels, pro-regime forces entered the key town of Khan Sheikhun in northwestern Idlib province for the first time since they lost control of it in 2014.

According to the Britain-based Syrian Observatory for Human Rights war monitor, the strikes pummelling Idlib have claimed more than 860 civilian lives since late April.

The UN says more than 400,000 people have been displaced.

Here is some background.

Strikes by the regime and Russia pick up after the powerful Hayat Tahrir al-Sham (HTS) jihadist alliance, led by Syria's former Al-Qaeda affiliate, takes control of the area on January 2019.

A major escalation begins in late April after clashes and strikes since February had already killed more than 200 civilians, according to the UN.

Bordering rebel backer Turkey, the region under HTS control covers nearly all of Idlib province and parts of neighbouring Aleppo, Hama and Latakia provinces. It hosts some three million people.

On April 26, Russia and the regime's other main ally Iran pledge along with Turkey to cooperate to "ultimately eliminate" HTS.

After Russian raids on April 26-27 kill around 15 civilians, the UN warns Moscow to abide by its commitment to "avoid large-scale military offensives" on the region.

By early May the strikes have forced 150,000 people to flee and knocked 12 hospitals and 10 schools out of action, the UN says.

Britain, France, the United States, and eight other countries at the UN Security Council warned on May 10 of a "potential humanitarian catastrophe".

On May 17, Amnesty International accuses the regime and Russia of a "deliberate and systematic assault" on hospitals.

The US says on May 22 there are indications the Syrian government used chemical weapons in Idlib. France says it has similar information. Neither offered proof.

On June 3, Human Rights Watch accuses the regime and Russia of using "internationally banned" weapons in attacks on civilians.

They include cluster munitions and large air-dropped "barrel bombs", it says.

After days of deadly violence, a new flare-up starts on June 15 when at least 45 people, including 10 civilians are killed in airstrikes and clashes. Five days later regime bombardment kills another 20 civilians.

Strikes on July 21 killed 18 civilians including seven children, among them a young citizen journalist Anas al-Dyab, who was a member of the White Helmets rescue group and also contributed to AFP.

The following day, regime and Russian airstrikes kill 50 people, many at a vegetable market in Maaret al-Numan.

The regime resumes military operations against the region on August 5, scrapping a ceasefire that had held for four days.

The Syrian army accuses jihadists of launching rockets on the Hmeimim airbase west of the bastion, causing "great human and material losses" nearby.

On August 11 the regime seizes the town of Al-Habeet on the edge of Idlib, after clashes that left more than 130 fighters dead.

On August 14, jihadists down a regime plane and capture the pilot, a first since the escalation in April, according to the Observatory.

At the same time, regime forces wage fierce battles with jihadists and rebels to try to take back the town of Khan Sheikhun.

On August 18 they enter the town and set their sights on a highway that connects government-held Damascus with the northern city of Aleppo, which the regime retook from rebels in December 2016.

A day later Damascus condemns the deployment of a Turkish military convoy towards Khan Sheikhun.