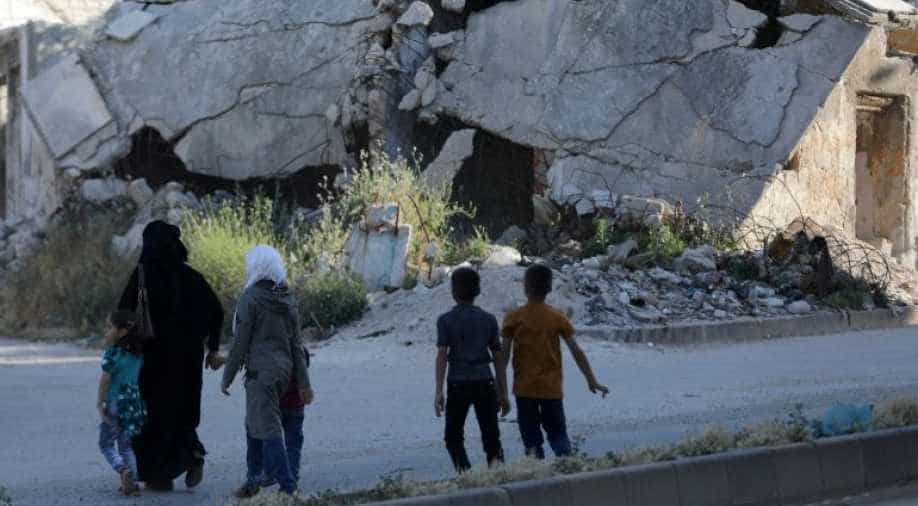 People walk near rubble of damaged buildings in the city of Idlib, Syria. Photograph:( Reuters )

The latest fighting broke out overnight Saturday to Sunday and has already killed at least 45 jihadists and allied rebels as well as 17 members of the pro-regime forces, the Britain-based monitor said.

Pro-regime forces were locked in heavy fighting with insurgents Sunday near a jihadist-run town in northwestern Syria, leaving dozens of combatants dead, a war monitor said.

The latest fighting broke out overnight Saturday to Sunday and has already killed at least 45 jihadists and allied rebels as well as 17 members of the pro-regime forces, the Britain-based monitor said.

The town of Khan Sheikhun lies on a key highway coveted by the regime.

The road runs through Idlib, connecting government-held Damascus with the northern city of Aleppo, which was retaken by loyalists from rebels in December 2016.

Pro-regime forces are deployed around three kilometres from the road and have been advancing over the past few days in a bid to encircle Khan Sheikhun from the north and the west and seize the highway.

On Sunday they retook the village of Tel al-Nar and nearby farmland northwest of Khan Sheikhun "and were moving close to the highway," Observatory head Rami Abdel Rahman said.

But their advance from the east was being slowed down due to "a ferocious resistance" from jihadists and allied rebels.

Syria's former Al-Qaeda affiliate Hayat Tahrir al-Sham (HTS) controls most of Idlib province as well as parts of the neighbouring provinces of Hama, Aleppo and Latakia.

A buffer zone deal brokered by Russia and Turkey last year was supposed to protect the Idlib region's three million inhabitants from an all-out regime offensive, but it was never fully implemented.

Regime and Russian airstrikes and shelling since late April have killed more than 860 civilians, according to the Observatory, which relies on sources inside Syria for its information.

On Sunday air strikes by the Syrian regime and its ally Russia killed two people, including a child, in the south of Idlib, the Observatory said.

More than 1,400 insurgents and over 1,200 pro-regime forces have been killed since April, according to the monitor.

The violence has displaced more than 400,000 people, the United Nations says.

Khan Sheikhun was hit by a chemical attack that killed more than 80 people in April 2017, attributed to the Syrian regime by the UN and international experts.

"Many of these people have been displaced up to five times," the UN's regional spokesman for the Syria crisis, David Swanson, told AFP on Saturday.