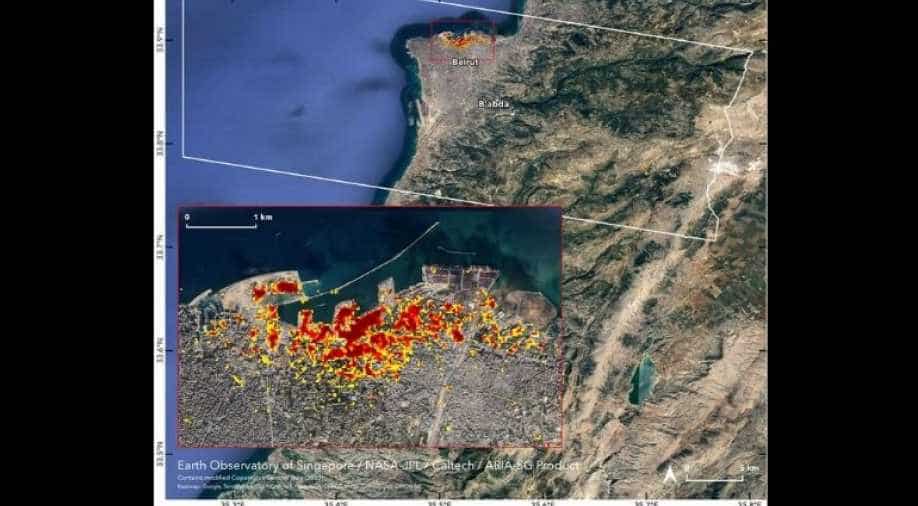 With the help of the map, the authorities can detect the areas where people might be severely affected and would require emergency assistance

The deadly Beirut explosion, that took nearly 165 lives, has caused severe damage in the city. To map the extent of this damage, NASA used satellite-derived data.

NASA's Advnaced Rapid Imaging and Analysis (ARIA) analysed the satellite-derived synthetic aperture radar data to map the likely extent of damage with the help of the Earth Observatory of Singapore.

Also read| Lebanese leaders were informed of risk posed by explosives at port in July: Reports

"Synthetic aperture radar data from space shows ground surface changes from before and after a major event like an earthquake. In this case, it is being used to show the devastating result of an explosion," NASA report reads.

In the map, the dark red pixels represent the areas that have been severely damaged by the explosion, areas marked in orange have been moderately hit and the yellow-marked portions reveal the areas which have sustained somewhat less damage. Each colored pixel represents an area of 30 meters (33 yards).

NASA released the map on its official website. With the help of the map, the authorities can detect the areas where people might be severely affected and would require emergency assistance.

The explosion in Beirut happened on August 4 and affected more than 6,000 people with more than 20 people still missing.