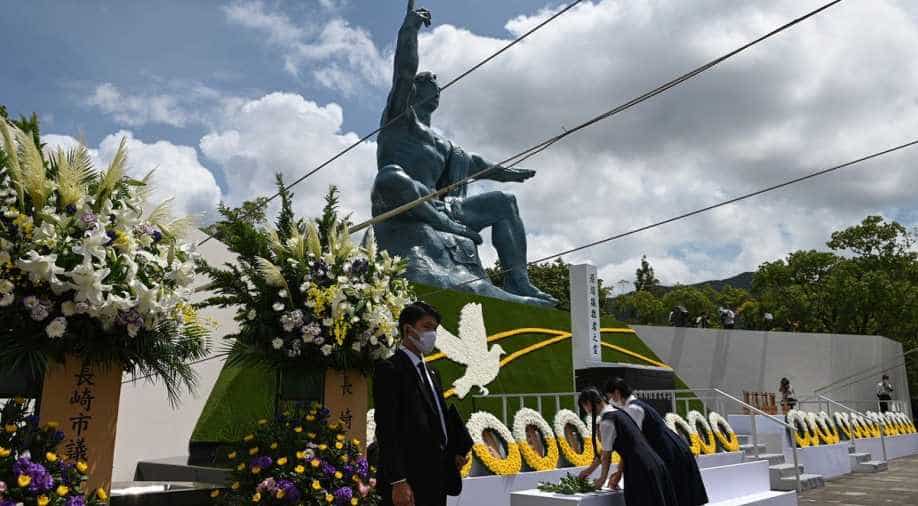 The August 9, 1945, bombing came three days after the United States dropped its first atomic bomb on Hiroshima, the world's first ever nuclear attack that killed 140,000.

The Japanese city of Nagasaki on Sunday marked the 75th anniversary of the US atomic bombing. To this end, the city's mayor and dwindling survivors of the tragedy have urged world leaders to do more for a nuclear weapons ban.

Nagasaki survivors and other participants stood in a minute of silence to honour more than 70,000 dead at 11:02 am -- the moment the B-29 bomber Bockscar dropped a 4.5-tonne plutonium bomb dubbed "Fat Man". Sunday's ceremony was, however, scaled down because of a rise in coronavirus cases in Japan.

The August 9, 1945, bombing came three days after the United States dropped its first atomic bomb on Hiroshima, the world's first ever nuclear attack that killed 140,000.

Many survivors developed cancer or other illnesses due to their exposure to radiation and suffered discrimination.

During Sunday's ceremony, Nagasaki Mayor Tomihisa Taue read a peace declaration in which he raised concern about a growing global opinion supportive of nuclear deterrence. Taue also urged Japan's government and lawmakers to quickly sign the Treaty on the Prohibition of Nuclear Weapons.