Muslims make US stronger every single day. They are being targeted with violence: Biden 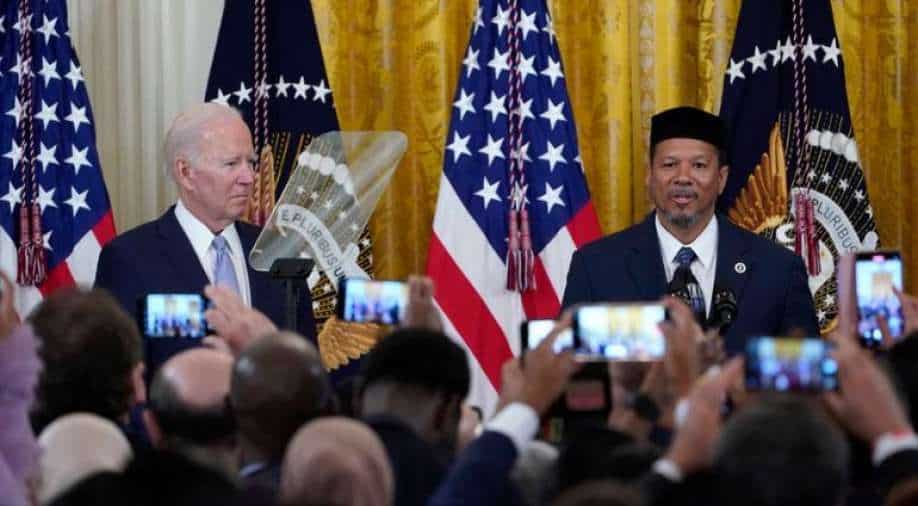 President Joe Biden, left, listens as Talib M. Shareef, right, President and Imam of the historic Nation's Mosque, Masjid Muhammad in Washington, speaks during a reception to celebrate Eid al-Fitr in the East Room of the White House in Washington, Monday, May 2, 2022. Photograph:( AP )

At a White House reception to commemorate Eid al-Fitr, Biden announced the appointment of the first Muslim as Ambassador-at-Large for International Religious Freedom.

US President Joe Biden on Monday said that the people of the Muslim community are being targeted with violence all over the world, but also stated that they make America stronger every day, despite the fact that they still confront significant problems and threats in the culture they live in.

President Joe Biden observed Eid al-Fitr on Monday, resuming White House celebrations of the Muslim festival that marks the end of Ramadan after his predecessor did away with them.

During Ramadan, Muslims around the world fast from dawn until dusk. Its conclusion usually entails a time of prayer, visits to family and friends, and celebratory meals.

At a White House reception to commemorate Eid al-Fitr, Biden announced the appointment of the first Muslim as Ambassador-at-Large for International Religious Freedom.

Pictures: Explained: What is Eid al-Fitr? Meaning behind the end of Ramadan 2022

"It’s especially important because today, around the world, we’re seeing so many Muslims being targeted with violence. No one, no one should discriminate against oppressed or be oppressed for their religious beliefs," he said to applause from the select gathering at the White House.

Arooj Aftab, a Pakistani vocalist and composer, was among the speakers at the event, which also included First Lady Jill Biden and Dr. Talib M. Shareef, Imam of Masjid Muhammad in Washington, DC, also known as 'The Nation's Mosque.'

"And honour the signs of hope and progress toward the world we want to see, including the ceasefire, which allowed the people in Yemen to honour Ramadan and celebrate Eid in peace for the first time in six years," he added.

"But at the same time, we have to acknowledge that an awful lot of work remains to be done abroad and here at home. Muslims make our nation stronger every single day, even as they still face real challenges and threats in our society, including targeted violence and Islamophobia that exists," he said.

"Jill and I were honoured to host an Eid al-Fitr reception at the White House tonight, and we send our warmest greetings to everyone celebrating across the world," Biden stated in a tweet following the event.