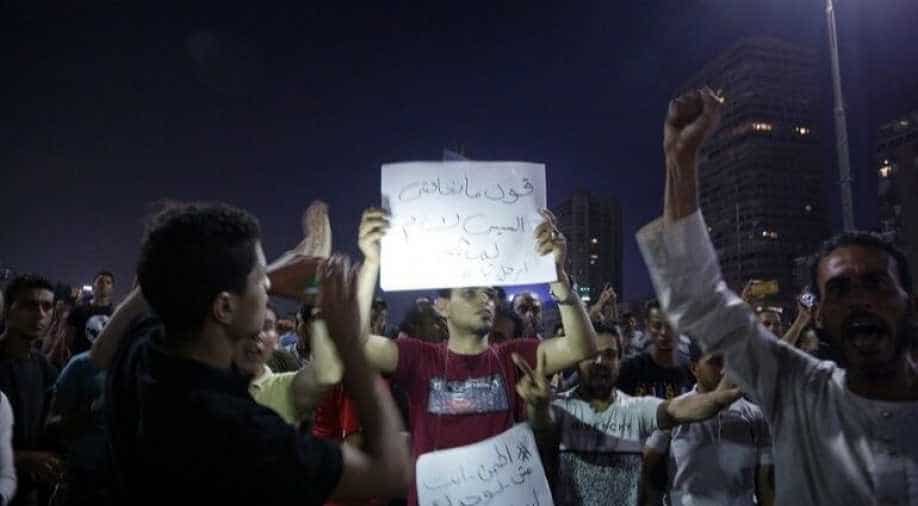 The Muslim Brotherhood was not behind the recent protests in Egypt, but has sought to capitalise on a new wave of dissent, analysts say.

Outlawed and repressed, the Muslim Brotherhood was not behind the recent protests in Egypt, but has sought to capitalise on a new wave of dissent, analysts say.

The protests first erupted on September 20 after an exiled Egyptian businessman in a series of online videos called for people to demonstrate against President Abdel Fattah al-Sisi, accusing him of wasting taxpayers' money on vanity building projects.

The videos by contractor and actor Mohammed Aly tapped into simmering anger against the country's economic woes and went viral, stirring rare political debate across the media and social networks.

Analysts in Egypt rule out any link between the Muslim Brotherhood and Mohamed Aly, who has so far refused AFP requests to comment on the situation.

But "the Brotherhood certainly benefited from his videos and their channels exploited what he was saying to portray a negative image of Sisi's leadership," said Mustafa Kamel al-Sayyed, a political science professor at the American University in Cairo, told AFP.

In the mercurial Aly, the Brotherhood saw an opening for renewed resistance rallying its supporters online.

The Islamist group, which has been banned since 2013 with thousands of its members jailed in a crackdown, quickly threw its support behind the demonstrations calling for Sisi's removal.

Many pro-Brotherhood figures have bombarded social networks with hashtags proclaiming anti-Sisi messages and slickly produced videos, highlighting the shortcomings of his rule.

And television channels, such as the Qatar-based Al Jazeera, and their social media influencers have battled against pro-government loyalists and bombastic hosts broadcasting daily on Egyptian satellite channels.

Sayyed believes the Brotherhood still holds sway with a sizeable part of the overall religiously conservative population, amid the backdrop of the dire economic situation for millions of Egyptians.

"The Brotherhood is an idea before it is an organisation and with the deteriorating economic situation for Egyptian society, this idea based on Islam will continue to attract many," he explained.

Founded by Egyptian scholar and schoolteacher Hassan al-Banna in 1928 as an Islamic charity and political movement, the Brotherhood grew rapidly, spawning offshoots from Morocco to Turkey, many of which remain active today.

But in Egypt its political currency ran out after its leader Mohamed Morsi became the country's first elected president in mid-2012 but remained in office for just one tumultuous year after the 2011 revolution that toppled long-time autocrat Hosni Mubarak.

Morsi was toppled by the military in 2013 and Egyptian troops killed some 800 Muslim Brotherhood supporters in a single day in August that year in what became one of the worst atrocities in the country's modern history.

Morsi, who only briefly held the reins of power, died earlier this year collapsing in a Cairo courtroom while on trial.

"The Brotherhood is hiding behind Mohammed Aly's appeal because they do not have the capacity to call for a rally," said Amr El-Shobaki, a former parliamentarian and analyst at the state-supportive Ahram Centre for Political and Strategic Studies.

"Their capacity to recruit new members has been weakened," he added.

Thousands of Muslim Brotherhood supporters have been jailed since Morsi's ouster, dozens executed and many have gone into exile finding safe havens in Turkey and Qatar.

Despite being chased from the political landscape, the Egyptian media often dwells on conspiracy theories that the Islamist group can easily organise and move supporters in from overseas.

But Shobaki argued, "the Brotherhood wasn't behind or even participated in the small-scale protests on 20 September".

"Rather, it was everyday youth, those economically marginalised, that went down" to the streets, he said.

Nearly one in three Egyptians live below the poverty line, according to official figures, as the government has imposed harsh austerity measures since 2016 causing prices to considerably soar.

Seizing the moment, however, Sisi himself appeared to blame the Muslim Brotherhood for the protests in a meeting with US President Donald Trump in New York earlier this month.

Asked about the small-scale protests, Sisi replied: "The region will remain in a state of instability as long as there's political Islam vying for power".

Shobaki maintains if the Brotherhood has any hope of being reintegrated into the political scene in the future, they must shed their "cultish" legacy.

"They can reorganise themselves as a political party again like Ennahda in Tunisia or the PJD in Morocco. The idea of this 'divine' group is why they have consistently failed for 91 years".