Mr. Justin Trudeau, you are wrong about the Swastika: Here are the facts 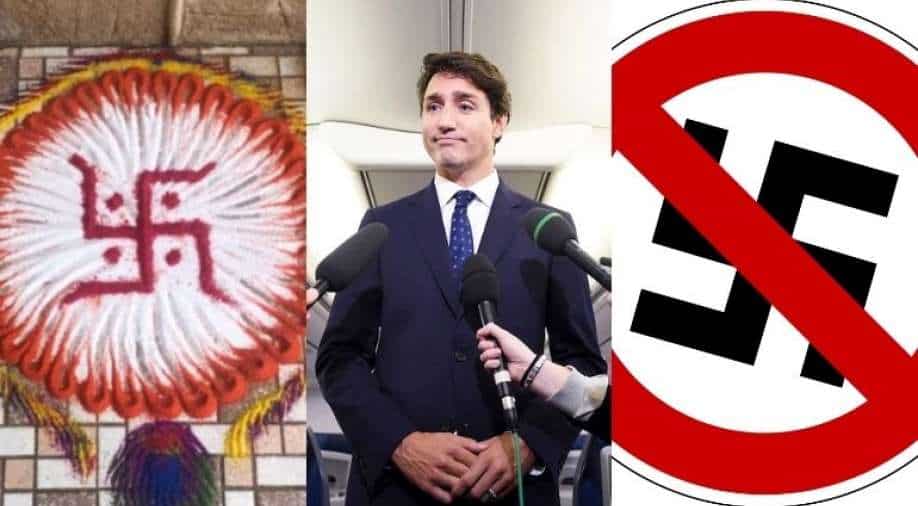 The 'Swastika,' an emblem used by Hindu, Buddhist, and Jain faiths, is frequently confused with Adolf Hitler's 'Hakenkreuz,' or hooked cross.

A prominent Hindu organisation in the United States has advised Canadian Prime Minister Justin Trudeau and Indian-origin lawmaker Jagmeet Singh not to mix the "Swastika," an old and auspicious symbol for Hindus, with the "Hakenkreuz," a Nazi symbol of hatred from the 20th century.

Both Trudeau and Singh have recently made statements accusing demonstrators of "waving Swastikas."

The HinduPACT (Hindu Policy Research and Advocacy Collective) has responded by urging Trudeau and Singh not to conflate the "Swastika," an ancient and auspicious symbol for Hindus, Buddhists, and many indigenous communities around the world, with the "Hakenkreuz," a Nazi symbol of hatred from the twentieth century. What is the difference between Swastika and Hakenkreuz?

The word swastika is derived from the Sanskrit roots su (good) and asti (to prevail), and it has been employed in the Rig Veda's prayers, which indicate well-being, prosperity, or good fortune.

It is claimed to represent the four yugas, or cyclical seasons, the four ends or objectives of life, the four stages of existence, and the four Vedas in Hindu philosophy. In some places in India, Swastika is even a girl's name.

Swastika is typically made of flowers or written in red, yellow, or blue ink or paint.

As a result, it can be found in a variety of temples and religious ceremonies all over the world, as well as as a welcome sign in many South Asian households.

The "hakenkreuz," on the other hand, is generally recognised as a symbol of anti-Semitism, as Nazi persecution resulted in the deaths of about 11 million Jews during the Holocaust, and it represents trauma for many people today.

Watch | Gravitas: Why is the Swastika reviled by the west?